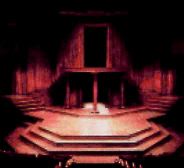 The famous thrust stage of the Stratford Festival Theatre, the theatre that Guthrie built

He graduated from Oxford University, where joined the Oxford Playhouse company, but at 6'4" was too tall for most roles, and moved into radio, pioneering BBC radio production in Belfast. He was invited by the Canadian National Railway to produce an historical series for its radio network: The Romance of Canada by Merrill Denison.

He worked as a theatre director in Glasgow, Cambridge and London (Old Vic). As resident director at the Old Vic, he mounted three brillliant seasons before WW II, including Lawrence Olivier's Hamlet, Henry V, and Coriolanus. When the Old Vic was bombed, he toured throughout England for four years, and then opened the New Theatre with a stunning production of Ibsen's Pier Gynt.

In 1952, he was invited to become founding artistic director of the Stratford Festival. He launched this small festival in a small town with brio from its first production, Richard III starring Alec Guiness and Amelia Hall. His name assured attention for the fledgling festival, but the international interest during Guthrie's reign and afterwards was well beyond most people's expectations. It was clear he wished to establish a national theatre company in this country, and although his wish never came true, he planted the seed that has formed a theatre community far beyond what he might have hoped.

He remained for two years before passing the company to his protégé, Michael Langham.

With his designer Tanya Moiseiwitsch, Guthrie is responsible for the thrust stage configuration of the Festival Theatre. Another thrust mainstage where he was artistic director, in Minneapolis, bears his name. He was knighted in 1961.

Sir William Tyrone Guthrie (Tony to his friends) is remembered for a piercing gaze, as well as a celebrated clapping of hands that could indicate, to his rehearsing cast, everything from impatience to slow pace to approval.

Christopher Plummer provides a graphic account of working with Guthrie at Stratford in his memoir, In Spite of Myself: "A Tyrone Guthrie production was more of a 'happening' than an evening of theatre - banners flying, flags waving, whole multitudes masterfully choreographed, sweeping across the stage, scenes changing at staggering speed and then, suddenly, in stark contrast, at his command, the absolutely still moments of great beauty and simplicity... Apart from his ringmaster's instinct for the circus which he never lost, theatre to him was a place of worship, of ritual, a religion, perhaps the oldest of all" (p. 163).