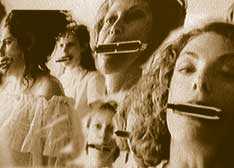 Feminist theatre collective fusionist/performance art company based in Toronto, Ontario. It was founded in 1993 by Fides Krucker and five other women from different musical disciplines, who wished to create music theatre performances in a collective of equals. The company's name was based on their first production, I Had An Urge to Write You (1993). The pieces were a fusion of sound, voice, text and movement. In 1995, three women left the group for solo careers, and a new ensemble was formed.

She Promised She'd Bake a Pie was produced in 1999. Trousseau - True Nature was presented in 2000 at One Yellow Rabbit's High Performance Rodeo, and Toronto's duMaurier Theatre Centre. In 2004, Urge presented And By the Way, Miss at the Harbourfront Studio Theatre, the stories of five adolescents exploring relationships with peers and adults.

The creative process allowed performers to work outside of their own disciplines. The productions were based in improvisation and there were no scripts - the performances could be different from night to night. The works treated the concerns of modern womanhood; for instance Trousseau addressed the issues surrounding marriage.