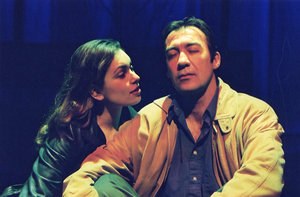 Apple by Vern Thiessen, with Daniela Vlaskalic and Shaun Johnston

A domestic drama by Vern Thiessen, premiered at Workshop West Theatre at the Kaasa Theatre in the Jubilee Auditorium, Edmonton, April 12-21, 2002; with Coralie Cairns as Evelyn, Shaun Johnston as Andy, and Daniela Vlaskalic as Samantha; directed by Ron Jenkins; set, costumes and lighting design by Narda McCarroll; sound design by Dave Clarke.

The triangle is eternal in Canadian theatre; however, Apple demonstrates that this recurrent sexual geometry still has the potential for more angles.

The genesis of Apple was in a task assigned to Thiessen four years previously for an Edmonton Fringe Theatre production: to write a five minute play based on the image of a grave filled with apples and three people standing around it. The many apples in this collaborative piece, entitled After Eve, were reduced to one, and the five minutes expanded over a series of workshops to ninety intense, emotional, intelligent minutes of play which resists a happy ending, and confounds stereotypes.

An inquiry into the meaning and importance of human relationships is wound around a rudimentary plot: middle-aged married man loses job, meets sweet young thing, has a brief fling, returns to wife. The wife, Lyn, is a shrewish real estate agent, with a virulent capitalist streak. She can spit out more words per breath than Andy, her browbeaten spouse, can absorb, and he retreats to the local park to contemplate his hopeless future. Here he encounters a student oncologist named Samantha. Despite his initial disinterest, Andy becomes captivated by this seductive but ingenuous young woman, who teaches him to enjoy the moment, to feel the warmth of the Spring sun, and to engage in an affair without commitments or assurances. Although she is accustomed to helping others through emotional pain, Samantha rejects personal intimacy because it hurts too much. Their tryst is interrupted when Lyn tells Andy that she has cancer, and he must now honour the promise he made when they married  to care for her until they are parted by death. He responds to the challenge, and in the process, begins to love her again. His learning curve is matched by hers, as she begins to realize the mistakes she has made, and to value every last moment of her life.

Ironically, the doctor who has diagnosed Lyn turns out to be Samantha, whom Lyn had previously met when she inspected Sams apartment for a possible sale. As in most of Thiessens plays, the complications multiply.

Samantha breaks out of the love triangle at intervals to present to the audience a lecture on the ways in which cancer cells invade healthy tissue, multiply and destroy. The subtext of her lecture is the growth and deterioration of relationships and individual lives  a kind of choric comment on the moral illness evident in the actions of the characters in the play. But there is also the possibility for learning and living in this fallen condition. Knowing becomes not a curse but a salvation. Thiessen skillfully and unobtrusively elaborates the metaphor of the Garden of Eden in Apple. The forbidden fruit is first introduced in terms of a womans breast, into which Andy bites; denied by his wife, he finds a forbidden fruit. Overcome by guilt, he confesses to Lyn that he is rotten to the core.

The play explores these complexities seamlessly, without blackouts, without intervals  moving the characters through a ritual of life and death. The words carry the action: they may be hurled out in anger or fear, be throttled by despair, or become an instrument of knowledge and feeling. And sometimes silence is the only possible language. The play closes quietly with the sibilant sounds of hushing.

To prepare for writing Apple Thiessen read many of Harold Pinters plays. As he explained in an interview, What isnt said between people [is] poignant, disturbing and moving. My job as a playwright is to eavesdrop, to try and figure out whats really going on without it being spoken in conversation. With this play, I was interested in exploring the structure as cyclical: how often I could have the same lines repeated by different characters; an accumulation of rhythms.

Apple is published by www.playwrightscanada.com. It was the winner of the Alberta Playwriting Competition, and the 2002 Elizabeth Sterling Haynes Awards (Sterling Awards) for Outstanding New Play.

Apple premiered in Poland in 2005 at Teatr Polski, Bielsko-Biala.