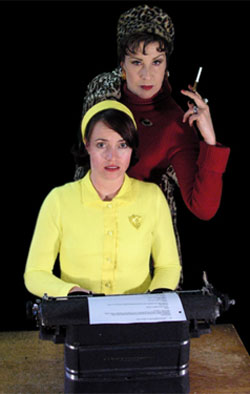 Versatile and vivacious actor, born in Montreal, and trained as a dancer. Coralie Cairns is based in Edmonton Alberta, where she has been Artistic Associate and General Manager with Shadow Theatre for twenty-five years. She has performed in over one hundred plays in every major theatre in Edmonton in a wide variety of roles - from a desperate housewife in Sexy Laundry by Michele Riml to an Irish mother haunted by the ghost of her child in The Weir by Conor McPherson.

Other performances with Shadow Theatre include: Glace Bay Miners Museum by Wendy Lill; Whos Afraid of Virginia Woolf? by Edward Albee; The Unexpected Man by Yasmina Reza; Blithe Spirit by Noel Coward; Much Ado About Nothing; While My Mother Lay Dreaming (2005) by Doug Curtis;Helens Necklace (2006) by Carole Frechette; Sexy Laundry (2007 and 2008) by Michele Riml ; MacGregors Hard Ice Cream and Gas (2008) by Daniel MacDonald; Dough: The Politics of Martha Stewart (2008) by Lindsay Burns; multiple roles in Harvest (2010) by Ken Cameron; a mom on the run in Women Who Steal by Carter Lewis; and a weird-exec sister to a misfit in Love Song by John Kolvenbach (2011). In 2013, she played a disgruntled genetics prof who is going blind in a new work by Calgary ophthalmologist and playwright, Arun Lakra, entitled Sequence. In 2018, she adopted an Irish accent for the role of the elderly mother, Aoife Muldoon, in Outside Mullingar by John Patrick Shanley. As Sonia in Vanya and Sonia and Masha and Spike by Christopher Durang, she convincingly played a depressed Chekovian spinster who finally discovers possibilities of hope within herself (2019). In October 2019, her performance in The Roommate as a stalemated single Midwest mom, who discovers empowerment through criminal behaviour, was engaging, funny, and moving.

Coralie Cairns performed in fourteen plays by Edmonton playwright, David Belke, including the role of a blocked author in the comedy-mystery, Becoming Sharp (2005), and a series of women courted through the centuries in Ten Times Two.

For Teatro La Quindicina, she played a feisty Scots theatre fan in Stewart Lemoines At the Zenith of the Empire; and in Lemoines Velvet Shock. For Workshop West Theatre, she played a terminally ill cancer patient in Vern Thiessens Apple, and the role of Margot in Maureen Hunters Transit of Venus (with the Studio Theatre, University of Alberta, 1999). For Theatre Network, she played the eldest sister in Daniel MacIvors Marion Bridge; and for the Mayfield Dinner Theatre she performed in David Belkes The Reluctant Resurrection of Sherlock Holmes, in Norm Foster's hilarious sendup of marital discord, The Long Weekend, and in Michele Riml's Henry and Alice: Into the Wild (2016). She has also performed for Northern Light Theatre, including Blood Oranges by Trevor Schmidt; Trunk Theatre (The Clean House and A Kind of Alaska); Blarney Productions (Skirmishes, Body of Water, Madagascar). For Wild Side Productions' The Children by Lucy Kirkwood (March 2020, dir. Jim Guedo, she played a retired scientist determined to live well and fully, who is persuaded by a former colleague to return to a nuclear power plant to help clean up the contamination, displaying a compelling emotional range.

In 2004, Coralie Cairns toured Canada and Australia with Catalyst Theatres The Blue Orphan.

She has won two Sterling Awards, one for her role in Summer And Smoke by Tennessee Williams, and received Sterling nominations for Glace Bay Miners Museum, Honour, Full Gallop, Who's Afraid of Virginia Woolf?, and The Maids.

Coralie Cairns has acted in television features and movies, including Heartland (2007), filmed near Calgary.

She retired from her position as General Manager of Shadow Theatre at the end of 2021.