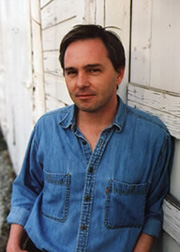 Playwright, director, actor, and storyteller, born in Edmonton, Alberta in 1964. Doug Curtis studied at the Banff Centre for the Arts and at the University of Calgary.

He has performed in his own stories and the works of others at theatres and festivals across Canada, including at Alberta Theatre Projects, on the Fringe Movement circuit, for Les 20 jours de théâtre a risque, One Yellow Rabbit, Mermaid Theatre, and on CBC Radio.

He also performed at Stage West (Calgary) in Sleuth, Funny Money, The Canterbury Tales and The Foreigner. For Lunchbox Theatre he performed in The Sitter and for Theatre Calgary in The Kite.. Doug Curtis has also performed in film.

His stories include: Black Ice and Red Adidas, Lester's Hat, and The Cruise.

In 1991 he created Ghost River Theatre, a company dedicated to combining live music and storytelling.

Doug Curtis enjoys collaborating with other theatres in the development of new plays, such as Mesa with One Yellow Rabbit (2000); Venus Rising with generic theatre; Paranormal (Edmonton Fringe 1995); An Eye for an Eye with Theatre Network (Betty Mitchell Award for Outstanding Musical 2001); and While My Mother Lay Dreaming with Shadow Theatre (2006).

His stories and plays are often autobiographical. The Ian Parkinson Project (2005), a surreal musical inspired by Curtis's diaries, is a record of the effects of Parkinson's disease at the age of 42. The Alan Parkinsons Project was produced three times, including at the World Parkinsons Congress. While My Mother Lay Dreaming looks back to his teenage years in the Calgary suburbs during an oil boom in the early 1980s, a memorable period for Alberta: "skyrocketing oil prices, global tension, thousands of people moving to Calgary, no affordable housing." The mother is grieving for a dead friend and barely coping with a faltering marriage to a workaholic husband who believes he can get rich in land development. The son explores the possibilities of grass and girls with two aberrant friends. The unseasonably warm weather hints at climate change. Curtis wrote the play "as kind of an environmental warning, the idea that our economic structure is flawed." He challenges the assumption that "the only way to maintain this lifestyle is to continually mass produce" (quoted in www.beatroute.ca). As My Mother Lay Dreaming is published in The Alberta Advantage: An Anthology of Plays, ed. Anne Nothof. Toronto: Playwrights Canada P, 2008.

Something True and Wonderful opened at Lunchbox Theatre in 2006. In her review for CBC radio, Sharon Pollock deems it a "light lunch": "Steve, an inveterate liar, and Evelyn whos seeking a truthful mate, meet up at one of those self-improvement retreats. Theres an attraction between the two. But Evelyn demands truthfulness only in so far as it meets her needs, and Steve cant seem to break out of his habitual lying" (13 Nov 2006).

Curtis's latest project is called Doing Madame Butterfly. According to Stephen Hunt, "The mini-opera is based on his experience in Toronto 20 years ago when he worked at a small Toronto theatre company which toured a three-person version of Madame Butterfly to senior homes and convalescence centres" (Calgary Herald) 29 April 2012).