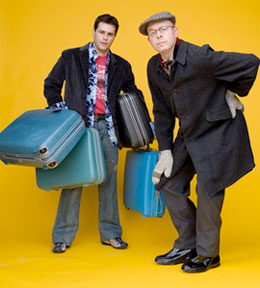 It was subsequently performed by Workshop West Theatre, Edmonton, October 11-21, 2001 (directed by Ron Jenkins), with Jeff Haslam and Ashley Wright as a mismatched duo, and has played across the country since then. In 2006 and 2008, the Ghost River Theatre production of Mesa toured in the United Kingdom, with actors Christian Goutsis and Christopher Hunt.

Mesa tracks an odd couples journey south from Edmonton to Mesa, Arizona: Paul, a 35-year-old wanna-be artist, and his grandfather-in-law, Bud, a 93-year-old, long-retired bank manager. Their divergent philosophies of life are played off against each other, showing their inadequacies and their strengths. Bud is the pragmatist, having worked hard and earned his way through life. For him, art is fine as long as its entertaining. He has played in a dance band in his spare time, and thoroughly enjoys dancing with the widows at Saturday night dances. For Paul, however, an artistic vocation is a higher calling that requires a full time commitment, and he believes that Bud has in effect settled for less. Buds response is that life is not a race to win.

Having never driven south to Arizona, Paul wants to explore the authentic history and landscape. Bud wants only to find the Dennys, Motel 6s, and bathrooms  on schedule, with no detours. Having lived through the best and worst of nearly one hundred years, he has no romantic illusions about the glorious past and the exploits of American cowboys and Indians. He prefers the escapism of the casinos en route, and his only compromise detour is to see London Bridge parked in the middle of the desert. Gradually, despite his frustrations, Paul begins to appreciate his point of view. London Bridge, after all, was sinking into the mud of the Thames, and survived through a brick-by-brick relocation, proving that the most unlikely changes can occur. He is in effect on his own road to Damascus. When in an act of rebellion, he takes a detour to Tombstone, he finds it survives as a parody of the West, with mannequins enacting gunfights (like Value Village run by the Mob).

When they finally arrive at Mesa, he finds that the warmth, the sunshine, the immaculate white trailers, and miniature gardens with gnomes, promote a positive frame of mind, a pleasant change from his negative critical state in the cold North.

Mesa is a male buddy play, and women remain offstage. Paul phones his wife at regular intervals, to report his progress to an answering machine, and Bud phones a new love interest to see if she will be making the trip to the Mesa trailer court. Although it is evident that both men need their women, it is also evident that their psychological journeys are primarily solo. Paul is engaged in the archetypal male pursuit of finding himself. Buds journey is towards death, which he realizes when he finds blood in his urine.

Most of the action takes place in two chairs parked centre stage on a painted highway, and on either side of the chairs when the focus is on one point of view or the other. A trailer court band provides colour, drama, and entertainment value while accompanying and commenting on the action.