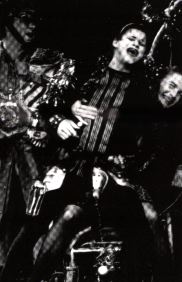 This is a seminal Generation X work (though the playwrights would despise the description) that has been revived often in Montreal, and toured Canada and the world in over 100 productions to wildly enthusiastic audience and positive critical reaction.

Written over a period of a year and through several workshops, the piece - a series of short, barely-related sketches and songs - sets out to explode Baby-Boomer icons: beloved Quebec television shows, Martin Luther King, Jacques Brel, and theatre itself (a belligerent and confused "audience-member" is abused by the cast).

It firmly established Messier, Champagne, Caron and Mouawad as multi-talented artists to watch.

A video version of the play was released in 1998.