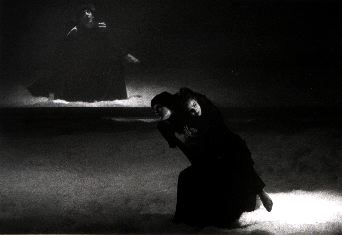 Multidisciplinary company in Montreal, Quebec, founded in 1980 by Gilles Maheu, discontinued in 2005.

From the start Carbone 14's output was marked by creation and research into the art of the actor and a new theatrical literature that accommodated dance, music, film and architecture.

Its work has also had an element of social commentary. Pain blanc (1981) spoke about a consumer society; L'Homme rouge (1982) spoke about solitude; Le Rail (1983) was an examination of physical and spiritual brutality; Marat-Sade (1984) reflected on revolution.

It was with Le Dortoir (1988), however, that Carbone 14 exploded on the international scene. The work toured internationally and the televised version of the piece won an international Emmy.

Critics greeted this inventive company with excitement and anticipation for each successive work.

Most of the company's works were born in the renovated fire hall Espace Libre in the working class district of Hochelaga-Maisonneuve in Montreal. In 1995 the company opened its own space in a renovated factory in the same district. The space - Usine C - comprises a wonderful theatre, rehearsal spaces, a beautiful atrium and a café-restaurant. Carbone 14 inaugurated the new space with snippets of works from its repertory and a revival of Le Dortoir.

In 2000, the company suspended activities for a year while Gilles Maheu directed several productions of Nôtre Dame de Paris. This move was not without repercussions. The company lost regulars and audience favourites Johanne Madore and Rodrigue Proteau. Despite this, Maheu and company mounted Silences et cris in May, 2001, to a generally good reception.