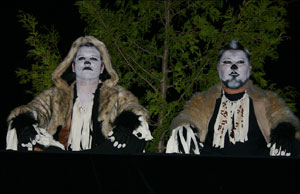 First Nations Theatre Company, founded in 1984 by Manitoulin visual artist, writer, and filmmaker, Shirley Cheechoo in Wikwemikong Unceded Reserve, Manitoulin Island, Ontario. At more than thirty years old, De-ba-jeh-mu-jig Theatre is the longest running Indigenous theatre in North America, its longevity owing to the strength, vision, and ingenuity of the People who make it their home. The theatres name, a Cree-Ojibway compilation whose sense is Tellers of Stories, reflects its origins: stories by and for young people seeking direction. Those early works have evolved into a wide variety of performances for every age, most often linked in essential ways to traditional teachings.

De-ba-jeh-mu-jig Theatre can also claim Tomson Highway as an Artistic Director in its early years, during which time his monumental play, The Rez Sisters, was first workshopped with actors from Wikwemikong. Subsequent works by Drew Hayden Taylor (Toronto at Dreamers Rock, Someday), Daniel David Moses, and Alanis King helped to establish the theatres reputation for stunning creativity in dialogue and staging.

More recently, De-ba-jeh-mu-jig Theatre has developed a unique method that combines collective creation with engagement of the whole person--the whole artist. Called the Four Directions Creation Process, it was developed by several current key members of the company and draws on all aspects of the artist as a resource--the emotional, spiritual, physical, and intellectual--as captured in the theatres signal description, the artist is the creation; the performance is the celebration.

While De-ba-jeh-mu-jig Theatre is unique in its creative method, it is also innovative in taking theatre beyond Manitoulin Island. Its animators travel to remote northern communities where they teach and inspire potential theatre-makers on their home grounds, reviving there the vital arts of storytelling. It also offers internships on site in Wikwemikong through a national Arts Animation Program.

The theatre has recently expanded into a fully equipped Arts Creation Centre in the town of Manitowaning, near Wikwemikong, but its main stage, and in some ways its home, remains the ruins of Holy Cross Mission on the reserve, open to the air with a spectacular view of the bay. Bird calls and the occasional rain shower contribute to performances in surprising ways.

It has also toured its productions abroad, and collaborated with other companies to create unique festivals. In 2012, it performed Global Savages, about the 18,000 year history of Indigenous peoples in North America, at the Citizens Theatre in Glasgow, and returned in 2014 for the "On Common Ground" Festival, performing with 150 community performers from Glasgow. In 2012, the company collaborated with an Indigenous theatre company in Villa El Salvador, Peru.

De-ba-jeh-mu-jig Theatre produced the first and only play entirely in the Ojibway language, Lupi: The Great White Wolf. It has produced more than sixty original creations and custom performances, detailed on its website. At the heart of De-ba-jeh-mu-jigs work is an understanding of theatre as an ancient art, linked in intimate ways to the continuing of traditional knowledge, and so it has become integral to the past, present, and future of its community.