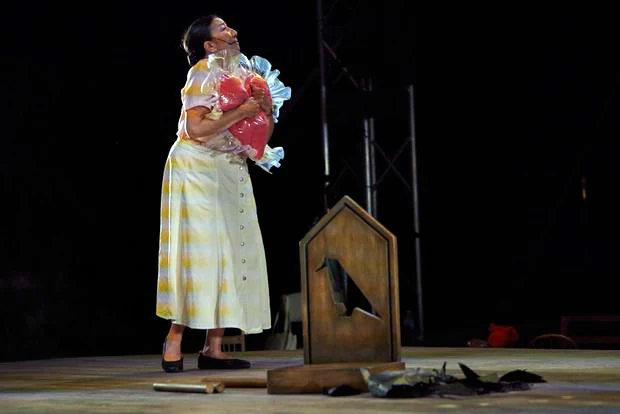 Comedy in two acts by Tomson Highway, premiered at the Native Canadian Centre, Toronto by Native Earth Performing Arts, November 26,1986, directed by Larry Lewis, with Gloria Miguel as Pelajia Patchnose, Muriel Miguel as Philomena Moosetail, Monique Mojica as Marie-Adele Starblanket, Anne Anglin as Annie Cook, Gloria Eshkibok as Emily Dictionary, Margaret Cozry as Veronique St. Pierre, Sally Singal as Zhaboonigan Peterson, Rene Highway as Nanabush, and Cheryl Mills a Bingo Girl. It was translated into French by Jocelyne Beaulieu as Les Reines de la réserve and premiered by Théâtre Populaire du Québec in 1993. In 2011 it was revived by Ken Gass with a culturally diverse cast at the Factory Theatre. For the Stratford Festival's 2020 season (delayed to July 2021 by the Covid-19 pandemic), The Rez Sisters was performed in a tent by an Indigenous cast, with Jani Lauzon as Pelajia Patchnose, Tracey Nepinak as Philomena Moosetail, and Nicole Joy-Fraser as Annie Cook (directed by Jessica Carmichael).

The plot follows the pattern of the journey motif. Seven women on the "Rez" share anger, laughter, hardship and gossip when they decide to go to Toronto for the world's biggest bingo game. During the trip, one woman dies of cancer, and another wins $600, which she uses to install a new toilet in her home. A male trickster or Nanabush is present throughout, transforming into a Bingo Master, a Seagull and a Nighthawk during the action.

Highway has indicated that the work was strongly influenced by Michel Tremblay's Les Belles-soeurs, touching on the themes of complicity among women and on games-playing as way of reinforcing a community. It was also influenced by the work of James Reaney in its enacting of the interconnection of mythology and everyday life.

The work mixes crackling dialogue with a First Nations spiritualism to show the forces shaping these women's lives: traditional and modern. Although written primarily in English, it interjects Cree and Ojibway, the languages of the reserve on Manitoulin Island where the action takes place.

All of the women have experienced colonial and patriarchal abuse, but find strength in their shared goal. Winning the bingo becomes a means of overcoming their privations and limitations, although it is the journey towards this goal that provides them with communal strength and resolve. Nanabush interacts with each, provoking, challenging, thwarting, and encouraging.