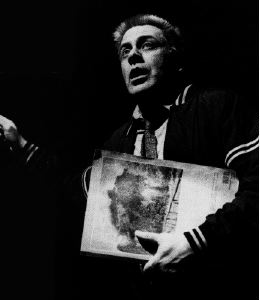 Eddy dreamed of a pro boxing career but now runs a greasy spoon in Sudbury with his wife, Mado. Suddenly he is given one last chance...to manage a young fighter. But even as he prepares the boy, Eddy has to do battle with the ghosts of his own past.

Like all of Dalpé's works (Le chien, for instance) the language is blunt and spare and the stagecraft masterful.