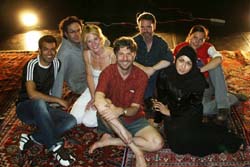 For over forty years, the Goethe-Institut Toronto has been promoting a dialogue between Canadian and German artists in order to foster an understanding of contemporary German culture and facilitate a transatlantic exchange of views, artistic practices, approaches and aesthetics. The Institut strives to support the Canadian theatre scene by staging German plays with Canadian artists, organising workshops and discussions with Canadian and German playwrights, directors, dramaturgs, choreographers, or taking Canadian artists (e.g. Ross Manson) to Germany to experience and work in an international context.

The program department of the Goethe-Institut Toronto organizes a broad range of events and supports projects in the fields of theatre, dance, film, new media, arts, music, literature, and more. Main venues are the in-house multimedia hall (also for rental) as well as many partner locations. Beyond this, the Goethe-Institut advises and liaises between the Canadian and German art scenes. Half of the worlds stages are in Germany, Austria and Switzerland. The Institut arranges trips to Germany for Canadian experts and journalists and supports stipends for theatre artists (with a good knowledge of German) for assistantships at German theatres.

For the University of Toronto conference Faust in the 21st Century: Peter Stein as presenter; film screenings of The Schaubühne Berlin  Collaborative Theatre; Steins 24 hours Faust

The Queen of Colours performed in English and German by Erfreuliches Theater Erfurt at the Milk International Childrens Festival 2005.

Dossiers on theatre and dance (www.goethe.de/theatre)

Dance in Germany and beyond (www.goethe.de/dance)