Playwright, born 1950 in Swansea, Wales and emigrated in 1956 to Toronto at the age of five.

Strongly influenced by the rock music of the 1960s, his first play, Strawberry Fields (Factory Theatre 1973) took its name from John Lennons song, and depicted the violent consequences of a rock concert. Clear Light (Toronto Free Theatre 1973) features LSD, urban angst, and the Watergate scandal, accompanied by a wailing saxophone. It was closed by the Morality Squad for alleged obscenity.

In his Preface to the published text, Hollingsworth explains that his historical epic is made for an audience raised on rock music and TV. In the age of electronic information, sixty scenes an hour sets a proper pace. It is the goons of history in their very own Goon Show. It is the Canadian Book of the Dead, a merry tale told by ghosts and demons. It refutes the lie that Canadian history is dull.

Hollingsworth gleaned his historical characters and plot from The Dictionary of Canadian Biography, added visual images from popular culture, and employed the farcical satiric style of Monty Python and the British TV puppet show, Spitting Image, combined with improvisation and carnivalesque comic exaggerations. Each Part of The History of the Village of the Small Huts is written and performed in a style appropriate to the time period: the "New France" plays are written in the classical French styles of Rabelais and Corneille, the Jesuit mystery plays and Moliere; The Plains of Abraham is a Georgian comedy; The Mackenzie-Papineau Rebellion is a Punch and Judy show; The Great War is a Dadaist cabaret; "World War II" is Brechtian.

In her introduction to the published text, Michele White describes the characteristics of the production: Against a black void, the actors, in an exercise of sheer precision move in tandem with hundreds of computerized lighting cues. They act out the hyperbolic facial and body gestures which the lighting technique and absence of physical location demands of them. Through body language created almost entirely from their heads and trunks, in their overblown physical attire, the performers, alone, must signal to the audience all the sense of place the text requires  from the muddy street of Hochelaga to the beaches of Dieppe.

A series sequel, entitled The Global Village brings the history of Canada to the present with four more Parts, including Trudeau and the FLQ (1997), and finishing with Life and Times of Brian Mulroney, (co-written with Deanne Taylor, VideoCabaret at The Cameron House, Toronto, 1999).

In 2012, the Stratford Festival hosted the VideoCabaret production of The War of 1812 (dir. Hollingsworth) in the Studio Theatre Annex. Originally the final part of "The British," it is a scathing portrayal of the idiocies and brutalities of the cross-border war, initiated by US President James Madison on a whim, and costing Tecumseh's First Nations their land and lives. Eight actors evoke armies and generals, Laura Secord and her cow, and Tecumseh and the Prophet through clever quick changes of costume and facial alignment. "Shards of light frame the actors, and brief blackouts edit their appearances and vanishings" (Deanne Taylor, Stratford program guide). In June 2012, it played at the Magnetic North Theatre Festival in Ottawa. It won Dora Awards for Acting Ensemble, Direction and Costume Design, and also earned nominations in the categories of Lighting, Sound and Production. 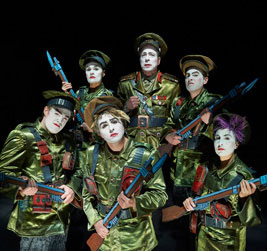 VideoCabarets production of The Great War 2016. Photo by Michael Cooper.

Hollingsworth was awarded a Dora Award for Confederation in 2004.