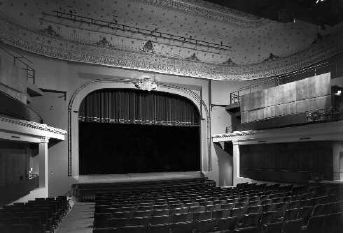 The newly refurbished interior of the Monument National

Four-storey building and theatre designed by the firm of Perrault, Menard and Venne and opened in 1894 on St-Laurent Boulevard in Montreal, Quebec, that has been the site of much of Canada's theatrical history as well as history itself.

The house was under the sponsorship of the Société Saint-Jean-Baptiste, a semi-religious, semi-political organization that used the space for its rallies, family entertainments (religious pageants, variety shows and tepid boulevard farces) and the speeches of visiting Catholic dignitaries. From the start, too, it was rented out to companies both professional and amateur.

The Monument eventually was the home of Yiddish theatre (1915-50), and was used by the city's diction schools for their showcases. It also housed touring companies, opera, ballet, operetta and variety shows. Many of the city's emerging companies and artists of the 1930s, 40s and 50s mounted works there including the Théâtre du Rideau Vert and Gratien Gélinas. It was the site of the North American premiere of Rostand's Cyrano de Bergerac and housed one of the first cinemas on the continent, the Eden.

In 1965, the National Theatre School of Canada took over the building and used it to stage its productions. The stage and house, though, were in disrepair and the school, together with government funding and commercial organizations, launched a campaign to bring the place and the area back to life (this section of St-Laurent Blvd. had become the red light district).

It was reopened with grand pomp on its 100th anniversary and there were some additions: a little café on the ground floor, a state-of-the-art studio space, a museum of photos on the mezzanine and a recovered beauty that is utterly elegant. A third performance space, La Balustrade, was added later.

It is now a very busy space featuring a broad cross-section of cultural events.