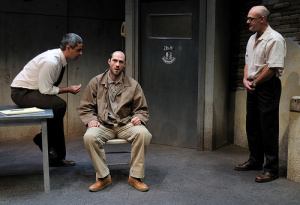 Professional small theatre company, based in Ottawa, Ontario which began as The Actors Co-op Theatre in 1986, and has operated as New Theatre Ottawa since 1992. The Companys original mandate was to produce challenging international works, such as David Mamets American Buffalo at the National Arts Centres Atelier in 1986. In 1989, it produced Jim Garrards Cold Comfort at the Great Canadian Theatre Company. Morris Panychs 7 Stories was produced with the National Arts Centre in 1993.

Since 2006, the Company is committed to producing new works by Ottawa playwrights and world premieres with local actors and designers. It typically performs in the Arts Court Theatre.

More recent productions include: Facts by Arthur Milner, co-produced in 2010 with GCTC as part of their season. In an Arabic translation, Facts toured the West Bank and Israel in 2011, and was subsequently produced in English at the Finborough Theatre, London in 2013. The Players Advice to Shakespeare by Brian K. Stewart (with actor Greg Kramer, directed by John Koensgen) premiered in the 2011/12 season, and went on to tour Queens University and the St. Lawrence Shakespeare Festival in the fall of 2012, and the Edinburgh Fringe Festival in 2014. It won two Ottawa Critics Circle Awards, and four Prix Rideau Awards.

Since 2016, the Artistic Director is John Koensgen.