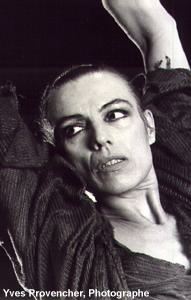 One of the country's great actors, and a seminal participant in the beginnings of experimental and feminist theatre in Quebec. Pol Pelletier has been involved in all aspects of theatre, as a director, theatre founder, playwright, theorist, and educator.

She was born November 6, 1947 in Ottawa Ontario, and graduated with a BA from the University of Ottawa in 1968. She participated in the student theatre company, La Comédie des Deux Rives, at the university. From 1970 and 1974 she acted in classical and contemporary plays in French and English in several theatres throughout Québec and Ontario. For Théâtre du Nouveau Monde in 1977 Pelletier acted in Les vaches de nuit, a short, explosive monologue by Jovette Marchessault, that became almost her signature piece in both languages for many years.

Pelletier was co-founder of two experimental theatre companies: the Théâtre Expérimental de Montréal (TEM) (now the Nouveau Théâtre Expérimental) in 1975, and the Théâtre Expérimental des Femmes (TEF) in 1979. In 1978, for TEM, she led a radically powerful collective creation entitled A ma mère, à ma mère, à ma voisine, and produced Trac, a special issue of the TEM journal on the objectives of the women in that company. At TEF, she performed in her own work, La Lumière blanche, and initiated an amazing range of activities at the TEF that brought women together night after night inventing new approaches to theatre and trying out their ideas. She was also one of the author/actors in the seminal feminist work, La Nef des sorcières.

Pol Pelletier resigned from the TEF in 1985 and undertook an intense exploration of theatre that took her around the world. She revealed what she had discovered through this exploration and from the entirety of her theatrical experience with three magnificent solo works, Joie (1992), Océan (1996) and Or (1997), performed by her own company, La Compagnie Pol Pelletier, founded in 1990. In 1998, Pelletier was awarded the prize for best female actor at the Masques Awards in her production of Océan.

She is also the founder of DOJO (1988) a centre where theatre practitioners and creators work on perfecting their art. She has performed the works in theatres and festivals in Canada, Europe and Africa.

She has said of her work, "My theatre is a theatre of exploration. If what I am doing does not transform me, if I find I am repeating what I know how to do simply to give pleasure, I won't do it. My goal, really, is not only to give people aesthetic emotions, but to chemically and energetically transform them."

In 2004 she created the solo work, Nicole, c'est moi a response to the massacre of fourteen young women at the Polytechnique in Montreal. It provides a history of feminism, reciting the names of women such as Simone de Beauvoir, and Jovette Marchessault, and the names of the slain women. Pelletier sees in this tragedy the end of feminism, and a return of patriarchy.

From 2005 to 2008, she lived in France, where she developed a cabaret with accordion entitled Une Contrée sauvage appelée Courage, which she brought back to Montreal in 2009. In all her work, she expresses the necessity for artists to shake up society like an earthquake, and to resist complacency and the status quo.

In 2012, from November 14 to December 10, she occupied a deconsecrated Catholic church in Montreal to present "revolutionary activities" mornings and evenings, without subsidies and completely independently, including her new work La Robe Blanche that exposes the abuses of the Catholic church, and its influence on Quebec identity; and 14 Femmes repatriées, to mark the anniversary of the Polytechnique massacre.

According to theatre scholar, Louise Forsyth, "Pol Pelletier is one of the very few women anywhere in this country or the world who formulated in her published works (there are several articles) and in her workshops and theatre practice an exciting new theoretical approach to acting, production and the body on stage."

Profile by Gaetan Charlebois and Anne Nothof, with additional information from Louise Forsyth.