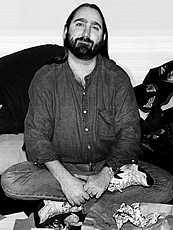 Monologue in one long act by Mark Leiren-Young, initially produced by Savage God and premiered at Bard on the Beach, August 5, 1996, directed by John Juliani and featuring David Berner. It subsequently played at Philadelphia's Walnut Street Theatre.

The work features an actor, Jon, who happens to be Jewish, appearing as Shylock in a production of Shakespeare's The Merchant of Venice which just prematurely closed due to the controversy surrounding the work. He is meeting his audience at a "talk-back" session and he is alone. We see him in character and out (indeed, the entire play is a process of stripping down from character to actor).

The play is a wondrous diatribe about art, the responsibilities of the artist, and about whether theatre exists to make people comfortable. Jon had decided to play Shylock as a villain rather than as a victim (ie: plea for tolerance) or buffoon (ie: see how he's harmless). As Jon sees it, that the villain of the work is Jewish is simply another layer of the character (as Jon's own Jewish heritage is another layer of his persona). It also reminds us that one of the layers of Shylock is our own response to him. Though it sounds as if the actor has it all figured out, political correctness and the very real discomfort people feel towards this play (and, incidentally, Shakespeare's Taming of the Shrew as well) are impediments. However, it is also necessary that Jon faces himself. Accused of racism and of being a "self-hating Jew," he has to return to what propelled him towards this career, this role and this interpretation.

Of course, it is not just about The Merchant of Venice. In an age were Victor Hugo's and TS Eliot's works are diluted to musical form and when the Stratford Festival is accused of dumbing Shakespeare down for the masses, Shylock is, too, about all of theatre and where it is going. As Jon says, "...obviously in this age of childproof caps and warning labels on fresh fruit it was only a matter of time before we had to start standing up here after every play to make sure you understand what you just saw." Shylock is a prickly play with no easy answers.

Critical reaction to the piece has been positive. Writing for The Vancouver Sun, Malcolm Parry said, "Shylock should really run until the political correctness it so thoughtfully eviscerates has been bulldozed back into history's sanitary landfill." Jo Ledingham of The Vancouver Courier called the work, "Dangerous, daring and provocative."