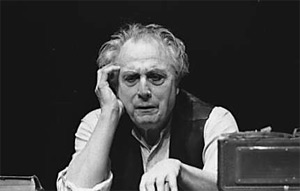 François Rozet had a magnificent career in France (including touring with Sarah Bernhardt) before coming to Quebec to perform, but especially, to teach, in 1940. He played in virtually of Montreal's theatres and was a particular favourite at Théâtre du Rideau Vert.

His voice, approach to the classics, and bon-vivant attitude had a profound influence on an entire generation of Quebec actors.

He was made an Officer of the Order of Canada in 1971 for his contribution to French theatre.