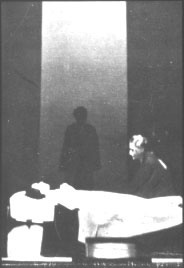 Herman Voaden began writing Hill-Land: A Play of the Canadian North For a New Theatre, his eleventh drama, in August of 1932 and first staged the play with his Play Workshop at the Central High School of Commerce in Toronto in December of 1934.

Hill-Land was inspired by the three generations of Voaden's own family in Canada. The play's invincible matriarch Nora, refusing to be conquered by the soil, climate and isolation of Northern Ontario, was based on Voaden's pioneering farmer grandfather, James Voaden, who emigrated from Devonshire, England, to St. Thomas, Ontario, in 1857 and died there at the age of 92. The third-generation characters Paul, Nora's grandson, and Rachel, the seventeen-year old school teacher who falls in love with and marries Paul, were based on Voaden and his fiancée Violet Kilpatrick.

In Hill-Land Paul's faith in himself and life are tested by the death of Rachel after giving birth to their son and by Nora's death. But the dying Nora helps Paul to recognize the eternal continuance of life: "Life passes into death....And always, always, new life springs up - as if from death itself." Paul comes to accept that Rachel has become one in the eternal beauty of nature: "she shall have rest, in the everlasting hills," and affirms that the beautiful but harsh North will be "our land."

Voaden surrounded his realistic characters with choral figures who comment on the action of the play and use stylized dance movement to express the emotion of scenes. Malcolm Morley, the British adjudicator of the 1935 Dominion Drama Festival, criticized Voaden's non-realist "symphonic expressionist" blending of lyric speech, music, lighting, and stylized setting and stage movement. Morley found Hill-Land "a highly static representation, an elaborated tone poem" and criticized Voaden for departing from the "general understanding that the chief agent in the performance of the Drama was the actor."

Hill-land is perhaps the best representation of Voaden's "symphonic expressionism" of all of his plays. All the elements (and weaknesses) of the concept - melding music, dance, theatre and design - are here. Considering the date of the premiere, though, the work is startlingly modern. Indeed, it is part of an traceable line from the Greeks to the Europeans, to the austere-beautiful works of the Group of Seven and then on to John Coulter (Riel), and to the present, particularly the works of Gilles Maheu and Carbone 14 (for example, the 1998 production L'Hiver/Winter, which would qualify as "symphonic expressionism").

Staging the play now would be difficult undertaking. However, Voaden had a firm grasp on his material, an almost prophetic understanding of what would become of Canadian theatre design, and a flare for the "coup de théâtre" that cannot be underestimated. For the reader, there is nourishment to be found in the dense symbology of the work and references to the Greeks, of course, but also to the Bible, Ibsen, Chekhov, the burgeoning art of a young nation.

In a review of the premiere of Hill-Land, The Globe wrote, "[it is] profoundly moving...a mood of exaltation is induced which is rare in the modern theatre." But a criticism, often leveled at Voaden, appeared in Saturday Night; Bernard Keeble Sandwell wrote, "our own impression is that it is a bad thing for his plays that [Voaden, the dramatist] and Mr. Voaden the electrician and stage-picture-maker are both inside the same skin, for it lets the stage-picture-maker boss the dramatist around."