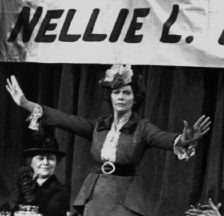 Kate Reid came to Canada at the age of 10 months. She was educated at Havergal College for girls, the University of Toronto, and the Royal Conservatory of Music before appearing at Hart House Theatre and subsequently on the summer theatre circuit, including in Bermuda with Christopher Plummer. She performed in London, England, and was then invited to the Stratford Festival in 1959. She appeared on and off at the Festival until her death, in strong roles of the Shakespearean repertory (Celia in As You Like It, Emilia in Othello, Nurse in Romeo and Juliet, Katherina in The Taming of the Shrew, and Lady Macbeth opposite Christopher Plummer), and the modern classics (Mme Ranevskaya, The Cherry Orchard)). She was simply amazing in the Stratford production of the two-hander The Gin Game.

Her Broadway career was also very successful, with many of America's great dramatists writing roles for her (Tennessee Williams, Slapstick Tragedy; Arthur Miller, The Price; Edward Albee, A Delicate Balance).

She had also played at the Shaw Festival (title role in Mrs. Warren's Profession and The Apple Cart 1976); National Arts Centre; and Theatre Aquarius (among others) and had a notable career on television and in film. Her performance opposite Dustin Hoffman in the televised Death of a Salesman was study in subtlety next to Hoffman's fascinating but over-the-top creation.

She was a member of the Order of Canada (1974), and had won several awards for her film and television work as well as Dora Mavor Moore Awards in 1980 and 1981.