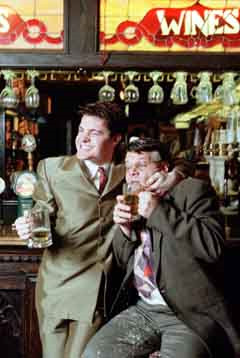 Tragi-comic play by Morris Panych, premiered at Tarragon Theatre, Toronto Ontario on April 28, 1998 with Richard Zeppieri as Lawrence and Richard Waugh as Holloman, directed by Panych, set and costume design by Ken MacDonald.

Lawrence & Holloman is an episodic two-hander which enacts a bleakly comic philosophical investigation of the meaning of life. In twelve scenes heavily inflected with irony, it provides a series of trials which would undermine the most resilient Job. The optimistic Lawrence withstands the disasters secretly inflicted upon him by his supposed friend Holloman, a morose pessimist, who tries to cure Lawrence of his egotism, confidence and naivety. With each attempt, Holloman moves from resigned apathy to careful watchfulness, and finally to demonic determination, as Lawrence loses his sight, his leg, his freedom. But Lawrence maintains his belief in the importance of a positive perspective, and his faith in Hollomans friendship, even when Holloman confesses to his many attempts to destroy him.

Finally, Lawrence tests Hollomans friendship by submerging himself in the bathtub in Hollomans apartment, and Holloman is compelled (against all of his destructive inclinations) to save him. He finally resigns himself to living, only to die from a gunshot accidently fired by Lawrence from his own gun. His life ends with a bang and a whimper. Holloman's name alludes to the title of T.S. Eliot's poem, "The Hollow Men," which delineates the modern world as being without values, without conviction, ending "not with a bang, but with a whimper." As Lawrence has ironically commented before this final episode, We get what we get Holloman. Exactly what we deserve. And the play demonstrates his final assertion that Life has a brilliant kind of logic, even as he sits alone in the tub, searching for the right word.

With this play, Panych demonstrates his mastery of the Theatre of the Absurd.

Lawrence & Holloman is published by Talonbooks (1998).