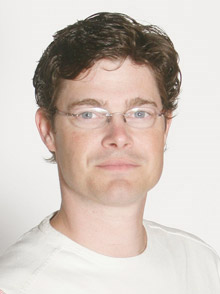 Multi-talented performer, born and raised in Montreal, where he graduated from McGill University with a BA in English in 1990. He then took a BFA in acting from the University of Alberta in Edmonton Alberta, graduating in 1993. His acting is notable for its intensity and athleticism, and he is also an accomplished performer as a singer and dancer in musical theatre.

Much of his work has been based in Edmonton, where his exuberant performance as the optimistic Lawrence, opposite Jeff Page in Lawrence and Holloman by Morris Panych at Theatre Network (2001) was one of the highlights of the season.

He has played many prominent and diverse roles at the Citadel Theatre. Recent performances include a man struggling to overcome depression in Every Brilliant Thing (2020); one of three potential fathers in Mama Mia! (2018); a love-struck impresario in Crazy For You; a slapstick servant in One Man, Two Guvnors (2014); a desperate has-been 1930s Hollywood actor in Make Mine Love (2014); an agonized, angry James Tyrone Jr. in Long Day's Journey Into Night (2013); an extraordinarily energetic incarnation of Frank N. Furter in The Rocky Horror Show (2011); a convincingly tragic Biff in Death of a Salesman (2011); an outstanding recreation of Billy Bishop in Billy Bishop Goes to War by John Gray. Ullyatt has also played Robert in The Drowsy Chaperone; Father Flynn in Doubt; the Monkey King in The Forbidden Phoenix by Marty Chan; Lumiere in Beauty and the Beast; the transvestite solo role in I Am My Own Wife; Brick in Cat on a Hot Tin Roof; Charlie and many others in Stones in His Pockets; Adam in The Shape of Things; Emcee in Cabaret; and multiple roles in Into the Woods.

For the Free Will Players, Ullyatt has played a wide range of roles since 1998, including Richard III; a devastatingly implacable and impassioned Coriolanus (2015); Iago in Othello; Bottom in A Midsummer Night's Dream; Launce in Two Gentlemen of Verona; and a stalwart Bassanio in The Merchant of Venice (2017).

In 2015, he played a convincingly alcoholic and morally compromised street cop with Jesse Gervais in A Steady Rain by Keith Huff (Blarney Productions).

Elsewhere, he played Mozart in Amadeus at the Sudbury Theatre Centre. In 2015, he performed in The Best Brothers by Daniel MacIvor at the Belfry Theatre.

He is also a street artist, and performs at festivals across Canada, in England and Ireland. With his wife Annie Dugan, he operates a theatre company and school called Firefly Theatre, which incorporates aerial techniques in its productions, such as Duck Duck Bang and Operation EVAsion.

For Ullyatt, acting is storytelling: "You come on stage, say the lines and the magic continues. I believe in the community and family of it. As a performer I'm pretty selfish, I want people to watch me and have a good time" (quoted from Citadel Theatre program for Cost of Living 2019/20 season).