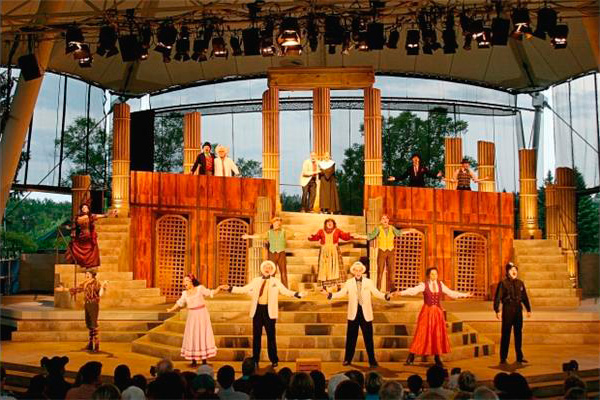 Free Will Players is a not-for-profit, professional theatre company which produces the Freewill Shakespeare Festival each summer in Edmonton, Alberta. The Players typically present two Shakespeare plays, a comedy and a tragedy, running alternate nights for six weeks in June and July. Performances take place in the 1,100 seat Heritage Amphitheatre in Hawrelak Park, rain or shine, come hail or high water.

FWP was founded in 1989 by members of the graduating class of the Bachelor of Fine Arts Program at the University of Alberta. Its mission statement is to create professional, contemporary, innovative productions of the works of William Shakespeare, accessible to audiences of all ages, education, and income levels, while developing the audience and theatre professionals of the future." FWP productions typically offer innovative settings and interpretations of the text, themes, characters, and action of Shakespeares plays to appeal to a diverse audience. They incorporate the ambience of a park setting (indeed, the company always lists Mother Nature as Ambience Director in its programs). The first play was A Comedy of Errors. In 1997, Free Will added a second play to its summer season, which now typically includes a comedy and a tragedy.

The 2005 season featured Romeo and Juliet as a conflict between rival street gangs, and Loves Labours Lost as a 1950s encounter between a Hollywood star and a Moroccan prince. In 2007, FWP presented a A Winter's Tale as a powerful story of self-inflicted madness, renewal and redemption; and a musical adaptation of The Two Gentlemen of Verona. In 2008, the company presented a domestic study of Richard III and his complex and complicit relationship with the audience, set in WWII England; and an energetic As You Like It, set in the 1950s in North America, with Mafia Boss Frederick and his enforcer Angelo. Touchstone was a nightclub comedien, and Jacques a beat poet.

In 2013, the Festival celebrated its 25th anniversary with productions of King Lear (with John Wright as Lear, and Kristi Hansen as Cordelia, dir. Jim Guedo); and A Midsummer Night's Dream with John Kirkpatrick as Oberon/Theseus, and Belinda Cornish as Titania (dir. Marianne Copithorne).

In 2014, the canopy of the Heritage Amphitheatre was wrecked by a tempestuous wind, and the Company had to find an alternative venue in the Myer Horowitz Theatre in the University of Alberta Student Union, presenting one play for a shorter run: The Taming of the Shrew from July 9 to 27. It moved back to Hawrelak Park for the 2015 productions of Coriolanus (dir. Guedo) and As You Like It (dir. Copithorne).

The Free Will Players celebrated its 30th anniversary in 2018 with a production of A Comedy of Errors, with Belinda Cornish and Kristi Hansen as the confusing twins (dir. Dave Horak); and Hamlet with Hunter Cardinal (dir. Copithorne). Since its inception, the Festival has produced over 50 professional Shakespeare productions to the delight of nearly half a million people.

The founding Artistic Director was James MacDonald, followed by John Kirkpatrick for five years (2003-2008). Marianne Copithorne was Artistic Director from 2009 to 2018. Dave Horak was appointed AD in April 2020 for the 2021 season. Guest directors have included Stephen Heatley and Jim Guedo.

The Free Will Players Young Company offers annual apprenticeships to four theatre students, which include roles in the companys productions. Camp Shakespeare, founded in 1998, provides the opportunity for youth aged 8 to 16 to take part in a summer camp based in performance, education, and enjoyment of theatre. Led by professional instructors - including members of the FWP repertory company  Camp Shakespeare culminates in presentations prior to a weekend performance of one of the main stage productions.

FWP has occasionally expanded its mandate to include Shakespeare-related projects and productions at other venues. Examples include a four-actor adaptation of The Tempest, a musical revue called Shakespeare in Love Songs, and a production of The Merry Wives of Windsor on the steps of Edmontons City Hall.

In 2003, as part of the 15th Anniversary Celebratory Season, FWP commissioned a new work by Vern Thiessen entitled Shakespeares Will, which was produced in association with the Citadel Theatre in its 2004-2005 season.