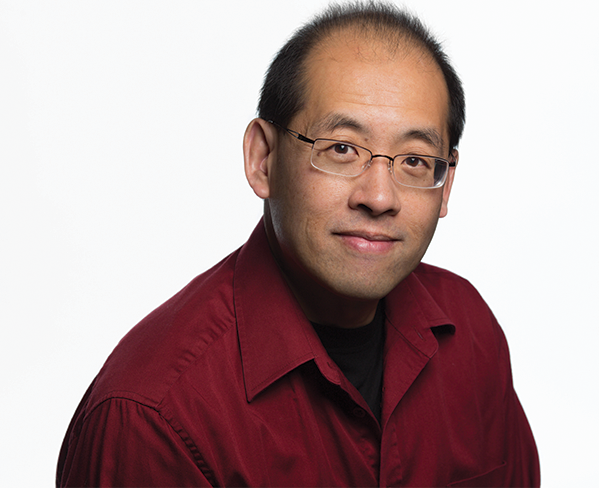 Playwright and novelist, born Marty Jack Woon Chan, May 11, 1965. He has a B.A. in English and Drama from the University of Alberta, and is based in Edmonton, Alberta.

Marty Chan began his playwriting career in the Fringe movement in Edmonton. His Fringe plays reflect his wide range of styles and themes and his comic bent: Snakes and Ladders (1991); Something Dead and Evil Lurks in the Cemetery and Its My Dad (1992); The Polaroids of Don (1994)-- a romantic comedy which juxtaposes fantasy and reality when the romance of a novelist and his female pseudonym is echoed by the overheated scenes from their joint romance novel; and Kick Up Your Heels, Nina Zapata (1998). The Bone House (1999) is a lecture on psychopathic murderers that turns into a chilling thriller when a killer stalks the audience. 80s Ladies was co-written with Marianne Copithorne for the 2001 Fringe. In 2011, he launched his satiric work, Mothership Down at the Edmonton Fringe. It begins as a satire of Progressive Conservative leadership candidate Ted Morton  inspired by Morton's invitation to disaffected Wild Rose Alliance party members to return to the Tory mothership. The play then suggests that Morton may indeed be a space alien, with leadership ambitions.

Marty Chan has also written theatre for young people, and collaborated on musicals: Confessions of a Deli Boy (1993) with music by Andy Northrup; The 7th Circle, which interprets high school violence in terms of Dantes Inferno (Fringe Theatre Adventures 2001), with music by Darryl Lindenbach. His 2004 Fringe production was Dead Beat: A Zombie Musical: with music by Allan Gilliland and Andy Northrup.

The Old Boys Club, a political satire, premiered at Workshop West in 1997. 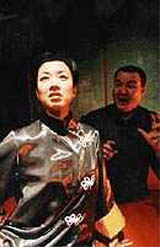 His best-known play is Mom, Dad, I'm Living with a White Girl (Cahoots Theatre at Theatre Passe Muraille 1995). It has played across the country in Theatre Network (1998); Prairie Theatre Exchange (2000) and in New York. It has been published by NeWest Press in Ethnicities: Plays from the New West, and by Playwrights Canada, and was the winner of the 1999 Sterling Award for Best New Play.

Mom, Dad, I'm Living with a White Girl provides a comic view of cultural collisions, misunderstandings, and misconceptions -- the latent and overt racism in Canadian society, and the limitations of 'politically correct' responses. It questions the assumption of a tolerant Canadian multiculturalism by foregrounding implicit racism that can operate in both directions  against the white majority, as well as against a Chinese minority. The scenario is loosely on Chans own experience with his parents when he was dating his wife. The protagonist, Mark Gee, is a young second-generation Chinese male living in Vancouver, who resists the traditional expectations of his parents, and decides to live with his white girlfriend. His mother reacts strongly against his relationship with a Gwai mui, whom she considers little better than a prostitute, and his father wants him to learn acupuncture so that he can take over the family business. Marks psychological defence is to demonise his parents in terms of the 1930s B-movie characterisations of the yellow peril as a sinister dragon lady, Yellow Claw, and her henchman who are seeking world domination. These Western constructions of personified evil express the racist stereotypes of the majority culture, but also Marks denial of his own heritage. The play works on two intersecting planes -- the literal and the imagined. In the imagined world of the B-movie, Mark plays a secret service agent named Agent Banana; his girlfriend, Sally, assumes the identity of his partner, Snow Princess. In these roles they enact the battle of good versus evil in the terms constructed by Western society, although Sally is also the voice of liberalism in the play that is shown to be disingenuous and naïve in its response to perceived racism.

Marty Chan has also disinterred the buried history of exploitation and racism in Canada. Best Left Buried (TheatreOne, Nanaimo) explores the reasons for the burning of Chinatown in Nanaimo in 1960 from the point of view of the Chinese who worked in the coal mines.

In The Forbidden Phoenix (Catalyst Theatre 2003), Chan deconstructs imperialistic national symbols, such as the Canadian Pacific Railway. The route to the west coast was blasted through the mountains by Chinese labourers, many of whom died in the construction of the National Dream. The Forbidden Phoenix is a political allegory about Chinese immigrant experience in Western Canada in the late nineteenth century. In Chans fable, the hero/protagonist is the Monkey King, the archetypal Chinese trickster figure, who leaves the starving Kingdom of the East and the repressive regime of the Empress Dowager to find a prosperous future for his people in the Western land of plenty. In the West, however, he is co-opted by Tiger (the forces of the establishment and government) to dig a tunnel through Gold Mountain so that Tiger can join his lover, the fearsome Iron Dragon. His only hope for a new life in the West is in the Phoenix (symbolizing the immigrants dreams), and together they defeat the Tiger and the Iron Dragon. The Forbidden Phoenix is performed as a Chinese opera, with acrobatic fights and dances.

Chans radio play, The Gift, also explores his Chinese roots. It is set in rural China during the Cultural Revolution, at a time when his own grandmother was made to kneel in broken glass by the Red Guard. A family persecuted by the Red Guard as counter-revolutionary attempts to escape to Hong Kong, but cannot afford to pay for everyone. The mother chooses to remain behind, and finally to end her life when she can no longer endure the tortuous conditions. Years later, in Canada, her daughter teaches her own daughter how to make wah teep, the traditional dumplings the mother has made in China  as a gift that passes through the generations. As in Mom, Dad, Im Living With a White Girl, family values are never wholly subsumed in cultural shifts.

His one-act play, The Interview was performed as part of Wrecking Ball 19:#ELXN42 in Edmonton on September 2015 (dir. Beth Dart). An earnest voter interviews three candidates for the PM job, with very entertaining and unsettling consequences. Most of Chan's plays are heavily invested in the Canadian political scenario. The play is published in Canadian Theatre Review 166.

In January 2002, Marty Chan was named playwright-in-residence at the Citadel Theatre, the first one in the theatres history. In 2011 he was writer-in-residence at the Edmonton Public Library, and in 2016, he was writer-in-residence at the Strathcona County Library, St. Albert Library, and Fort Saskatchewan Library. He has also served as Chair of the Edmonton Arts Council and taught playwriting at the University of Alberta. He received an Arts Achievement Award and a Performance Award from the City of Edmonton; and a Horizon Award from the University of Alberta for his contributions to theatre.

He has also written for television and for radio, notably the CBC series Dim Sum Diary, a comic exposé of his familys adjustments to life in the small Alberta town of Morinville, where they ran a grocery store, and were the only Chinese family in the area.

His television script, The Orange Seed Myth and Other Lies Mothers Tell aired on CTV and was nominated in 1998 for a Gemini Award for best writing in a childrens or youth programme, and awarded the Gold Medal for Best TV Pilot. Marty has also been nominated several times for the AMPIA award for his dramatic writing.