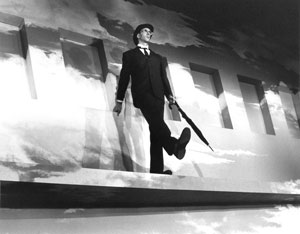 Award-winning set and costume designer, playwright and actor, based in Toronto, Ontario and Vancouver British Columbia. Since completing a Bachelor of Education in 1972 from the University of British Columbia, Ken MacDonald has designed for all of the major theatre companies in Canada. His career has long been associated with that of playwright and director Morris Panych, as actor, and director, but primarily as designer. Together, they have completed over 100 theatre projects. Panych believes that "Ken has an innate understanding of the underlying absurdity of [his] works, while at the same time understanding that, at its core, there is a strong undercurrent of realism."(Program note, The Shoplifters, Theatre Calgary 2015).

Ken MacDonalds designs are visually arresting, surrealistic, and highly metaphoric. He uses trompe l'oeil effects to manipulate perspective and composition through strong geometrical shapes and intense colour. For 7 Stories he created a surreal sky evoking the paintings of Rene Magritte on which was placed a series of windows overlooking a ledge. Characters appear and disappear through the window spaces, much like the Laugh-in American sketch comedy television series in the late 1960s.

For The Shoplifters, he created the storage room of a grocery store with hundred of cardboard boxes stacked up to resemble prison walls, with occasional niches for bottles or boxes, lit up like artifacts.

His designs are featured in Scenography in Canada by Natalie Rewa (University of Toronto Press, 2004).

Among his many awards are: Gemini Award, Betty Mitchell Award, three Dora Mavor Moore Awards, and seventeen Jessie Richardson Awards. His design for The Overcoat was featured at the Prague Quadrenniel in 1999.