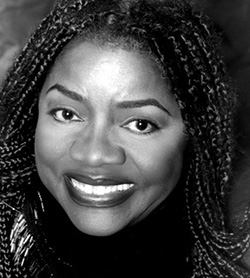 Actor and blues singer born in Newark, New Jersey in 1939. Salome Bey has lived in Toronto, Ontario since 1964, when she met Howard Mitchell, who promoted her career and founded several blues clubs, including The Underground Railway.

In the early 1960s, she performed with her sister and brother in the jazz trio, Andy and the Bey Sisters in venues throughout the United States and in Paris, France. Since then, she has conceived and appeared in musical theatre revues and performed as a solo entertainer. In the United States she won an Obie Award for Love Me, Love My Children and was nominated for a Grammy Award for the cast album of Your Arms too Short to Box With God.

In Canada, she appeared at Global Village theatre in the Robert Swerdlow revues Blue S.A. (1969) and Justine (1970); and Spring Thaw. She won the Dora Mavor Moore Award for her blues and jazz cabaret show, Indigo (1978), that traces the history of Black American music from field hollers and spirituals to Stevie Wonder and Patti Labelle. In 1983, she created Shimmytime, about jazz and blues singer Ethel Waters. In 1985, Bey wrote Madame Gertrude, about blues singer Ma Rainey. Her musical for children, Rainboworld, was produced at the Young Peoples Theatre in 1988. She performed in Thunder, Perfect Mind (Toronto Free Theatre, 1985); Mother Goose (Royal Alexandra Theatre, 1985); and Coming Through Slaughter (Silver Dollar Tavern, 1989).

In 1996 the Black Theatre Workshop honoured her for lifetime achievement with their Martin Luther King Jr. Award. She was made an honorary member of the Order of Canada in 2005.

She has two daughters, both singers, and a son.