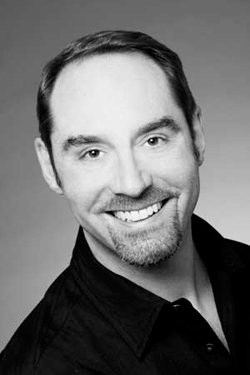 Director, playwright and producer Scott Burke has a BA from the Dalhousie University Professional Actor Training Program (1981-84) and an MFA in Theatre Direction from Penn State University (1985-88).

From 2003 to 2005 he was the Artistic Director of Theatre New Brunswick, where he directed Oh, Coward!, Mary's Wedding, Chairmaker the Musical, Dear Santa and The Hobbit.

As a founding member of In Good Company, he was the dramaturg and director of God's Middle Name, winner of the 2007 Robert Merritt Award for Best Production and Best New Play. He was also the founding Artistic Director/General Manager of Harbinger Theatre in Toronto.

His first play, Crazy Quilt premiered at the Old Red Lion Theatre in London, England as part of the London New Play Festival in 1993. It dramatizes the harrowing ordeal of a family following the abduction of a child. Hero Today, which shows how two unemployed superheroes resort to employment counseling, premiered in 1993 at Alberta Theatre Projects. Scavengers (Victoria Playhouse, P.E.I. 1998) portrays the sibling rivalry that follows the reading of a mothers will, which results in a scavenger hunt for the money and family reconciliation. In summer 2013, Ship's Company Theatre premiered Diligent River Daughter, adapted from Parrsboro native Bruce Grahams novel. The play opens on Parrsboro's main street, with the conflicted reaction of a young newspaper woman's response to the celebrations on the night the First World War ended. It then tracks back to her childhood, bringing back to life her memories of her beloved father, a community that has been changed irreparably by the war, and the history that has shaped her: The Titanic sinking, the Halifax Explosion, and the suffragette movement.

He is currently Executive Director of Kids Up Front Atlantic.