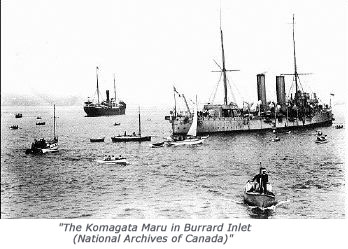 Drama by Sharon Pollock first presented by Vancouver Playhouse January 1976. It was directed by Larry Lillo, designed by Jack Simon, with Allan Stratton as T.S., Richard Fowler as Hopkinson, Heather Brechin as Evy, Leroy Schulz as Georg, Nicola Cavendish as Sophie, and Diana Belshaw as the East Asian woman.

The play is based on the true story of a Japanese freighter, named the Komagata Maru, carrying 376 immigrants to Canada from the Punjab in 1914. It was prevented from docking in Vancouver by government officials. After a standoff of seven weeks, the ship returned to India, leaving behind only twenty passengers who could prove former residence in Canada. The repercussions were a riot in India, a radicalization of Sikhs in Vancouver, the murder of the official who oversaw the exclusion, and the execution of his Sikh assassin. As Pollock says in her program note: By the early 1900s, the Canadian government believed it had devised an airtight method to virtually exclude immigration from Asia  by prohibiting the landing of immigrants who came by other than continuous passage from the embarkation point.

In her program note Pollock also explains that The Komagata Maru Incident is a theatrical impression of an historical event seen through the optique of the stage and the mind of the playwright. It is not a documentary account, although much of it is factual. To encompass these facts, time and place are often compressed, and certain dramatic licence is employed.

The play is set in a brothel, and the atmosphere is that of a circus with a Master of Ceremonies (T.S.) orchestrating and commenting on the action and words of the characters embroiled in the events. He is also the voice of public policy and public opinion. The Sikh passengers are represented by an East Asian woman on board the ship. As the agent of political policy, Pollock casts a Canadian of mixed heritage, Inspector William Hopkinson, whose mother was Punjabi, and whose father was a British sergeant stationed in northern India. Hopkinson has established a network of informers in the Vancouver Sikh community in an attempt to keep them under control, and to keep out more immigrants. His mixed race origins are exposed by the prostitute Evy, and he is forced to acknowledge his self-destructive hypocrisy before accepting his death as the hand of a revolutionary Sikh as a just retribution for his lack of compassion for others and his betrayal of his own people. In a series of short scenes and speeches which directly implicate the spectators, the work deals not simply with the systematic bigotry of the era but also with personal responsibility and (finally) liability. Again, Pollock exposes difficult issues in the country's past, raising problems that she rightfully feels the nation has not completely addressed. As she succinctly states in her program note, Until we recognize our past, we cannot change our future.

In 2017, the Stratford Festivial staged a revised version of The Komagata Maru Incident in the Studio Theatre (dir. Keira Loughran). The director took a more inclusive interpretation of the play, in an unnecessary attempt to make it more current and relevant. The prostitutes were characterized as Chinese, T.S. appeared initially as a First Nations woman in full ceremonial regalia, then as a colonial exploiter spouting government edits. The Woman's presence on the ship was emotionally amplified through her singing of traditional music.