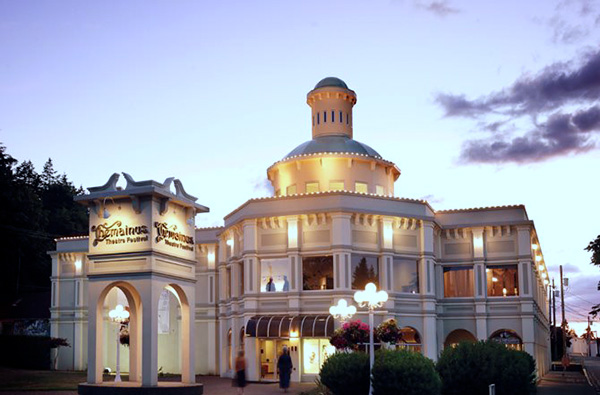 Professional, non-profit theatre, located in the seaside community of Chemainus, British Columbia on Vancouver Island, famous for its splendid historical murals. Chemainus Theatre was co-founded in 1993 by Ken Smith, who established a contact with Rosebud Theatre and School of the Arts, which was looking for a second site to provide opportunities for its graduates. After some difficulty in locating a venue, a community group led by Dan Sawatsky and Ken Smith raised the funds for a new building: a form of theatre temple, which includes a mainstage, studio theatre, Gallery for local arts and crafts, and the Playbill Dining Room. Chemainus Theatres goals are: to enrich the region; build community; and advance the arts.

The theatre produces an annual festival that explores and nourishes truth, hope, redemption, love and the human spirit. (website). Seasons typically include popular musicals, such as Mamma Mia (2019); a Kidzplay such as The Magicians Nephew (based on the Narnia stories, 2019); a Christmas play; a Canadian work, such as Waiting for the Parade (2014) and Kims Convenience (2018); and a classic work such as Mrs. Warrens Profession (2019). The Studio Theatre houses a contemporary work as part of the Discovery series, such as I & You by American playwright Lauren Gunderson. The theatre also hosts productions from Drayton Entertainment Company.

As of 2019, Chemainus Theatre Festival has been visited by over 70,000 residents and tourists.