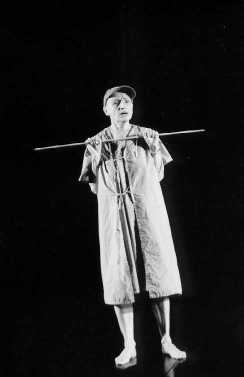 Rosemary Dunsmore in the February, 2001 Centaur Theatre production of Wit

Ontario-based actor/director, born July 13, 1953 in Edmonton, Alberta, who has appeared in theatre across Canada and around the world, including in England, Scotland, Holland and the US.

In Canada she has played at Canadian Stage (The Glass Menagerie 2005); and Centaur Theatre (Wit, February, 2001). For this performance she won the Masque Award for best actress, the first anglophone to have won in the leading actor category. At the Saidye Bronfman Centre, she performed in Single, and she participated in the national tour of Ten Lost Years (1975). Among the premieres in which she has performed is Tom Walmsley's Something Red

During her five seasons at the Stratford Festival, she has appeared as Mme Pernelle in Tartuffe (2017), Madame Arnfeldt in A Little Night Music, Celia in As You Like It, Helena in A Midsummer Night's Dream, and Stella in A Streetcar Named Desire.

She has directed at the Atlantic Theatre Festival (Hedda Gabler); at the Utah Shakespeare Festival; Manitoba Theatre Centre (Misery, Skylight); and for Equity Showcase

She has taught at the University of Toronto, National Theatre School of Canada, and at the Canadian Film Centre, among many others.

She is probably best known for her television work, notably in the CBC series, The Road to Avonlea.

Rosemary Dunsmore has said of acting and directing: "Directing is a job fraught with compromise. You're responsible for everything and in control of nothing. But when you're acting, you're in control of your performance."