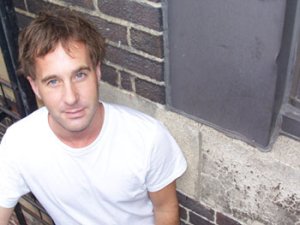 Playwright, dramaturg, teacher and performer, born in 1970 in Lindsay, Ontario and based in Montreal. Greg MacArthur graduated from Ryerson Theatre School in Toronto in 1992.

His work examines imagined and real dystopias: girls! girls! girls! (Montreal Fringe Festival 2000, dir. Peter Hinton) is based on the tragic death of B.C. teenager Reena Virk; Snowman (Imago Theatre 2003 ) portrays the consequences of the discovery of the ancient corpse of a young boy in a glacier. In Get Away (playRites 2005) a middle-aged man living in isolation on the edge of a forest to escape a strange global epidemic of apathy, takes in two homeless teens and finds them to be much more insidious than babes in the wood. Recovery (National Arts Centre 2006), set in an autocratic recovery centre in Antarctica, follows the progress of three addicts.

In Tyland (playRites 2010) two pregnant women with radically different life experiences and views are sent to colonize a remote island in the Arctic, one by choice, the other as punishment. The Toxic Bus Incident, inspired by a bizarre 2004 occurrence on a Vancouver bus, is infused with post-9-11 paranoia about the terrorist threat. A suburbanite woman gets on a bus in Richmond, and notices a dark-skinned man talking with the driver. When she and the other passenger begin to suffer from a mysterious sickness, her paranoia also has consequences for her family, even though it is finally diagnosed as mass psychogenic illness.

In The Missionary Position (University of Alberta Studio Theatre 2013), a group of nine young Canadian missionaries come together to offer their help to a small remote Central American country after a devastating tsunami. When they attempt to rescue what they believe to be a group of orphans, they are faced with a situation which forces them to confront their motives and beliefs. The play examines the question of foreign aid and intervention in the third world.

MacArthurs works have been produced across Canada, as well as in South Africa, Germany, the UK, Hungary, and the United States, and translated into several languages. In 2011, two of his plays ran in Montreal in French translations: Toxique, Maryse Wardas translation of The Toxic Bus Incident (Théâtre d'Aujourd'hui, dir. Geoffrey Gaquere,), and Réhabilitation, a translation of Recovery (Segal Studio, dir. Stacey Christodoulou).

His plays are published by Coach House Books.

More recently, he has been playing with the conflation of live performance, text, sculpture, and installation, using alternative spaces and venues for his work to see how they affect the viewing experience. A City, an ode to Montreal, was produced as a gallery installation in 2016. It comprises a mash-up of his experiences with his friends on the streets of Montreal, the bars, and dinner parties. It is one of a trilogy, which includes A Man Vanishes and The Golden Suicides, which explore the interaction of life and art, truth and fiction.

He has held residencies at Buddies in Bad Times (1997-98), Centre for the Book (South Africa 2003), Playwrights Theatre Centre Vancouver, and the Stratford Festival. He was Artist-In-Residence at Playwrights' Workshop Montreal from 2005 to 2011, and the 2011/12 Lee Playwright-In-Residence at the University of Alberta. In July to August 2020, MacArthur was resident at Berton House where he worked on Bill  a performance and literary text exploring themes of desire, obsession, sexuality, and morality through the voices of five queer male characters at different stages in their lives.

MacArthur believes the purpose of theatre is to excite, to challenge, to provoke, to affect change, to be sexy, to be dangerous, and he has described his own work as contradictory, unclassifiable, [and] vulnerable.