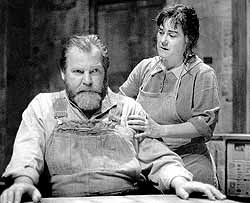 Drama in four acts by Merrill Denison, published in 1923 but not performed until 1974, a year before the author's death, at Hart House Theatre, directed by Richard Plant. Its first professional production was at Shaw Festival, 1996, directed by Neil Munro, with Michael Ball, Corrine Koslo, Elizabeth Inksetter and Richard Farrell among others; set designed by Peter Hartwell, lighting by Robert Thomson.

In French there is a term for this kind of work: misérabilisme - art characterized by a taste or fascination for depictions of human misery. Though the work follows the theatrical history lineage of Gorki's The Lower Depths, it is almost perversely misérabiliste in the way it presents unpleasant people in unpleasant surroundings who have hope dangled before them only to have it snatched away. Even the deaths of children are interpreted as a release from suffering: "...twelve children. Five dead, thank God."

The central setting, a mud-farm in the backwoods, is a character in the tale in that it provides an impoverished, decaying family with its meager living: threshing the hay that grows in the marshes. In set notes, Denison writes that the lives lived here are done so in "tragic futility". At the head of the family is a monstrous father, John Serang. His browbeaten wife, Lena (whom John calls "a sow"), barely copes with daughters and sons who can't wait to leave it all behind. What makes the work noteworthy (in the same sense that another famous Canadian work of misérabilisme - Aurore, l'enfant martyre was noteworthy) is that it dealt with subjects dangerous for the times, such as pregnancy out of wedlock, specifically that of the wayward daughter Sarilin.

After the initial grim picture is painted, the drama of the pregnancy and the boy (who may not be responsible) being brought up on charges for corrupting the girl begins. For Lena, however, the baby brings hope. The squalor is lifted as she prepares the home for the child. Lena has an epiphany: until now shame has guided this family and that will all change. It doesn't. The child, of course, is lost and the final moment of the play is as breathlessly hopeless as the first act.

Although not outrageously polemical, a socialist subtext runs through the work. Moreover, the work is sometimes surprising for for its insight, language and form. The pervasive philosophy is that of Naturalism: heredity and environment determine the course of a life.

At the time of the Shaw production, John Coulbourn wrote in The Toronto Sun, "The fact that Marsh Hay was published in 1923 and is only now getting its first professional stage production should tell you just about everything you need to know about this good-hearted, but ultimately dreary and mawkish effort."