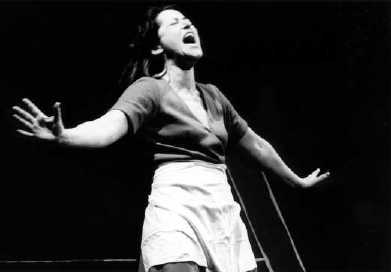 Ontario-based actor/writer/singer, born in Paris and raised in Calgary.

Among the companies where she has played are Centaur Theatre (Friedman Family Fortune, 1996) and in the national touring company of Livent's Ragtime. In 1998, she created a sensation with her Dora Award-winning Still The Night, a musical about the Holocaust, which subsequently toured the nation.

In 1999, she appeared in the Saidye Bronfman Centre production of They're Playing Our Song ; and in 2000, in Stratford Festival productions of Fiddler on the Roof, and Patience. For Theatre Aquarius, she has appeared in The Diary of Ann Frank (2009) and For This Moment (2010).

She has also acted on television, notably as the hard-nosed video editor in the CTV series ENG.

She has performed Yiddish songs widely in Canada and the U.S., and released four CDs.