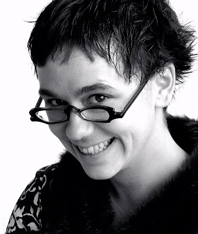 Playwright and translator, born 1971 in Quebec City, where she grew up, and currently based in Montreal Quebec, where she teaches at UQAM. She graduated from the Université de Montréal with a B.A. degree, and attended the National Theatre School of Canada, when she wrote her first work, Lhomme qui a vu lhomme (Monument National 1999, dir. René-Daniel Dubois). A revised version of the play, entitled Le gouteur, premiered in 2002 at Espace Go, produced by Théâtre Petit à Petit, and directed by Claude Poissant. Crime contre lhumanité also premiered at Espace Go, produced by Théâtre Petit à Petit in 1999 (dir. Poissant). It was translated into English by Bobby Theodore, and premiered at the University of Alberta in 2007 (dir. Ian Leung). The plays preoccupation with mortality and corruption, and its disturbing, visceral images, startled audiences and critics.

In 2000-2001 she was writer-in-residence at Théâtre Carrousel and at the Festival International des Théâtres Francophones in Limoges, France. Her plays are published in English by Playwrights Canada Press.