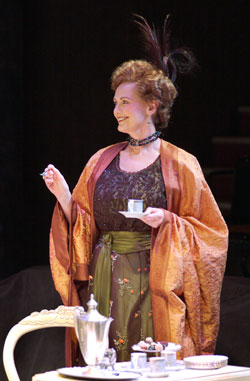 Goldie Semple in Diana of Dobsons.
Photo by Andrée Lanthier

Highly regarded actor, born in 1952 in Richmond British Columbia, died December 10, 2009 of cancer. After graduating from the University of British Columbia theatre program, she studied at the Bristol Old Vic.

On returning to Canada, she acted at the Manitoba Theatre Centre for four years in twelve plays, including as Rosalind in As You Like It (1981), and as Hannah in Not Wanted on the Voyage (1992), an adaptation of the novel by Timothy Findley.

Since then she has played at venues across the country, including Arts Club Theatre (Blowin' on Bowen, and Ken Ludwig's Moon Over Buffalo opposite her husband Lorne Kennedy, March, 1999); Vancouver Playhouse Mrs. Warren's Profession); Alberta Theatre Projects; Citadel Theatre; Canadian Stage; and Tarragon Theatre.

She was a resident company member of the Stratford Festival for nine seasons, performing lead roles in Taming of the Shrew, Cat on a Hot Tin Roof, Macbeth, Much Ado About Nothing). She was then in the resident company at the Shaw Festival for seventeen seasons, and performed in Easy Virtue (1999 and 2000), The Matchmaker (2000), A Little Night Music (2008), and Brief Encounters (2009), among many other diverse works.

She was a cofounder of Foolscap, a new theatre company in Stratford that performed poetry in an art gallery. She also taught and mentored young actors in a summer course for Queen's University students in association with the Shaw Festival at Niagara-on-the-Lake, and taught at a number of other Canadian universities, and at New York University.

Goldie Semple has been critically acclaimed for her elegance and stage presence, her intelligent interpretations, and her astute sense of comic timing.

She was married to actor Lorne Kennedy for 33 years, with whom she had a daughter.