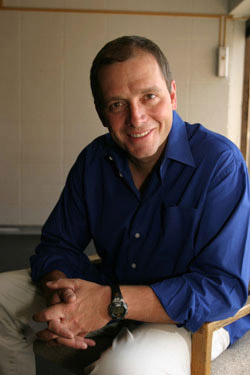 Director/actor, and artistic director of Theatre Calgary from 1999 to 2005. Ian Prinsloo was born at Kuwait City, Kuwait 28 April 1964. He grew up in Ontario and attended Ryerson Theatre School in 1984-85

He began his acting career at the Shaw Festival in 1986 as one of the ensemble, and encouraged by Artistic Director Christopher Newton he began directing (Waterloo in 1998, revived in 1999; and Uncle Vanya in 1999. At the Festival, he has also served as assistant director.

Working in Toronto's alternative and experimental theatre scene, he directed the premieres of Jason Sherman's The League of Nathans, The Retreat and Patience (for which he won a Dora Mavor Moore Award).

He was co-founder of Toronto's Orange Dog Theatre, which co-produced The League of Nathans with Theatre Passe Muraille. For Passe Muraille, he has also directed Andromache, A Play on Paper and Beirut. He has directed at Equity Showcase Theatre, the Toronto Fringe (among others) and served as dramaturge at the Banff Centre for the Arts.

During his tenure as Artistic Director, Prinsloo dedicated Theatre Calgary to producing "plays of the Canadian and Classical repertoire that have strong, complex stories which are relevant to the people of Calgary and southern Alberta." He recruited more local directors, designers and actors, and significantly improved the audience base and finances of the theatre. He co-adapted (with Greg Nelson) Dickens' A Christmas Carol for Theatre Calgary (1999), and directed the Theatre Calgary productions of Philip Barry's Holiday (March, 2000) and Tom Stoppard's Rough Crossing (September, 2000).

Prinsloo is a faculty member with Leadership Development at the Banff Centre for the Arts and continues with free-lance directing. He lives in London with his wife and son.