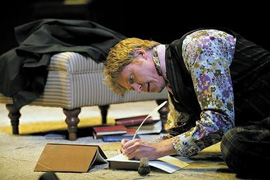 Geoffrey Pounsett as Robert Browning in How Do I Love Thee?, playRites 2010.

Accomplished actor and director, born in 1969 in Saskatoon Saskatchewan, and based in Toronto Ontario. He is a graduate of Queens University, and George Brown Theatre School.

Geoffrey Pounsett has performed in theatres across Canada. Recent appearances include: If We Were Birds by Erin Shields (Tarragon Theatre 2010); How Do I Love Thee? by Florence Gibson MacDonald (playRites 2010); Abraham Lincoln Goes to the Theatre by Larry Tremblay (playRites 2010); Chimera by Wendy Lill (Tarragon Theatre 2007); Much Ado About Nothing (2004) for the York Shakespeare Festival (dir. David Ferry); Noises Off (Theatre Aquarius); The Melville Boys by Norm Foster (Bluewater Playhouse, dir. Ferry); and The St. Nicholas Hotel by James Reaney (George Brown Theatre).

He has also appeared on TV series and on film .

As a director, he has worked with many new playwrights, including Kate Hewlett (The Swearing Jar, Toronto Fringe Festival 2008). He was nominated for a Dora Mavor Moore Award in 2008 for his staging of Brendan Galls A Quiet Place.