Annual festival of Canadian theatre (mainly musical theatre) staged at the Confederation Centre of the Arts in Charlottetown, Prince Edward Island. In 1977 the Festival opened a second stage for cabaret/revue style programming.

It was founded in 1965 by Mavor Moore, and the centrepiece of the Festival has always been Anne of Green Gables, adapted from Lucy Maud Montgomery's 1908 novel. The first season included Anne..., Spring Thaw, Wayne and Shuster, and Laugh With Leacock. 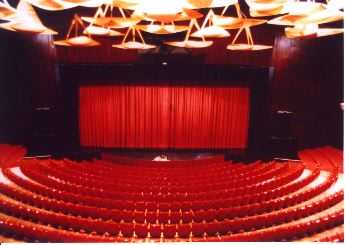 The Festival has been the source of many made-in-Canada musicals, including Fauntleroy, Kronberg: 1582 (which went on to Broadway and directed by Gower Champion as Rock-A-Bye Hamlet), The Dumbells, Turvey and Johnny Belinda among them.

After a series of downswings, including losing grant money for deciding to stage non-Canadian musicals (including Guys and Dolls in 1995), in 1996 the Festival staged only Anne.... However, in 1997 the revival of Johnny Belinda turned into a smash hit. In 1998 the company announced that in the 1999 season it would stage the first new musical since 1992, Emily, an adaptation of Emily of New Moon, Emily Climbs and Emily's Quest, all also by L.M. Montgomery. The run of the new work proved to be an enormous success exceeding box office expectations by twenty-five per cent.

In 2011, Cathy Elliott, a member of the Sipekne'katik Mi'kmaq First Nation in central Nova Scotia, directed her all-Indigenous musical, The Talking Stick, commissioned by the Charlottetown Festival for the Young People's Company, and performed by First Nations youth.

For the first time in its history, Anne of Green Gables was not produced at the Charlottetown Festival in the summer of 2021, a decision necessitated by the ongoing pandemic which restricted audience size. Three Maritime plays were featured: Between Breaths by Robert Chafe; the premiere of Dear Rita, a cabaret musical about Rita MacNeil, with script by Lindsay Kyte and musical arrangement by Mike Ross; and Old Stock: A Refugee Love Story, a 2b Theatre Company production, with script by Hannah Moscovitch.