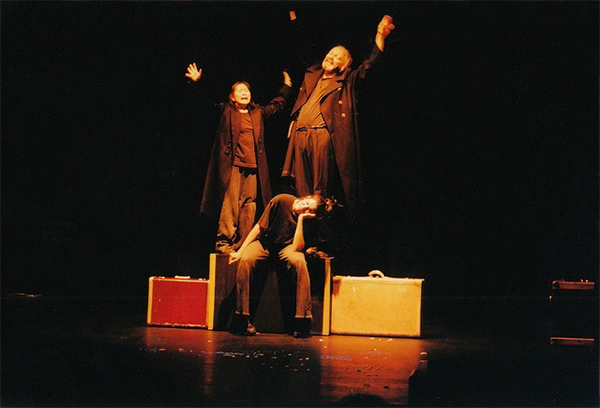 Innovative physical theatre company, which has enjoyed international exposure, based in Toronto, Ontario. Theatre Smith-Gilmore was founded by Dean Gilmour and Michele Smith in 1980; they met in 1978 while studying at the School of Jacques Lecoq in Paris. Smith and Gilmour have since created 38 shows, 25 of which have been original plays, many adapted from cultural classics.

Theatre Smith-Gilmour is a theatre of image and action: The actors imagination is at the centre of the process of creation and production. Performers articulate primarily with their bodies, expressing words, set and design.

The Company has created a wide range of productions for thirty years. Highlights from the past ten years include: Chekhovs shorts (2000-01), which played Factory Theatre, the Firehall Arts Centre in Vancouver, Workshop West Theatre, the Hong Kong Cultural Arts Centre, Eastern Front Theatre. the Saidye Bronfman Centre, and the Chekhov International Theatre Festival in Moscow.

Also in 2008, Theatre Smith-Gilmour began to work with the Humber School of Drama to create a new original work. Over four months of development, the group worked on a total of 25 stories from the Brother Grimm. GRIMM, which included six of these stories, premiered at Humber College in November, 2008. GRIMM Too was presented in association with Factory Theatre in February 2010.

In October 2009, Smith and Gilmour collaborated with Adam Paolozza and Ravi Jain to create SPENT, an absurd account of falling off the corporate ladder (website). The production was nominated for three Dora Mavor Moore Awards, winning one for Best Performance by an Ensemble.

The Assholes: A Cabaret opened at the Factory Studio Theatre in April 2016. Using a bouffon style, it targets the exploitative 1% minority  the greedy hypocrites, the assholes, who control the world. The show challenges the lack of conscience in our world.

In 2016-17, Theatre Smith-Gilmour toured an unsentimental and physically strenuous interpretation of William Falkners novel, As I Lay Dying to One Yellow Rabbits High Performance Rodeo in Calgary and the PuSh International Performing Arts Festival in Vancouver.