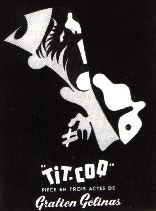 Drama in three acts by Gratien Gélinas, premiered at the Monument National, May 22, 1948, directed by the author and Fred Barry with set by Jacques Pelletier, costumes by Laure Cabana, and featuring the author in the title role. Revived all over the country since, recently at the Nouvelle Compagnie Théâtrale / Théâtre Denise-Pelletier directed by Michel Monty.

The title of the play is the nickname of the central character (it translates as Little Rooster or cock).

This bittersweet love story starts with a soldier, Tit-Coq, talking his way out of trouble. He had a fist-fight with another soldier who called him a bastard (which he is), and the commander wants to keep him on base for Christmas (which, being a bastard, is no punishment at all). The commander sends Tit-Coq home with the soldier with whom he was fighting. There, Tit-Coq discovers "family" and falls in love with Marie-Ange. They begin a love affair but Tit-Coq is sent off to war. Marie-Ange, meanwhile, is pressured to break her promise to wait for Tit-Coq's return and marries a wealthy suitor. Tit-Coq comes home enraged and tries to reclaim Marie-Ange, who still loves him. A priest, however, intervenes and explains the realities of the time to the couple: a divorce would be virtually impossible for Marie-Ange so any child Marie-Ange and Tit-Coq had in their illicit relationship would be a bastard...like Tit-Coq. Tit-Coq cannot allow this fate to fall upon any child of his. The couple breaks up as the curtain falls. 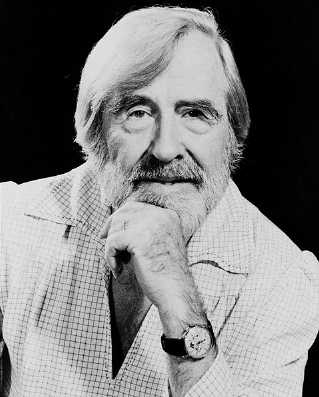 As with Gélinas's other plays there is a simplicity of line and dialogue. Joual is used. This play is considered, by many, to have kick-started the new Québécois theatre that then gave rise to Marcel Dubé, Michel Tremblay and a host of other playwrights and theatre artists.

The critical reaction was enormously positive. Montreal's Le Devoir called it a masterpiece and the Montréal Matin said, "it fulfils all our wishes." It did not do well, however, on its subsequent presentation on Broadway (February, 1951), where it was performed only three times after brutal critical reaction.

On its revival, in 1999, Pat Donnelly of Montreal's The Gazette wrote, "...the play proves stronger than the missing [Gratien Gélinas], or his underwhealming replacement; more powerful than the slick, retro style that director Michel Monty imposes upon it. It's impossible not to laugh and cry with these familiar characters, no matter how distant they seem within the depths of a theatre built to serve spectacle while drowning the word." However, Radio-Canada/Ici critic Robert Lévesque, accused the work of being an apologia for the reign of Maurice Duplessis and, particularly, for the atrocities which were committed on orphans in the infamous "Children of Duplessis" state-run institutions. He said, in his 1999 appreciation of the revival of the work, "[besides this aspect it now] holds absolutely no theatrical interest."