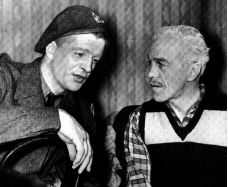 Drama in two acts by Marcel Dubé, premiered in a theatre at the Comédie-Canadienne, May 31, 1958, directed by Jean-Paul Fugère, with sets by Jacques Pelletier Gilles Pelletier in the lead; however, the work was first televised on Radio-Canada in 1957 with Pelletier. The play received substantial reworking and a remount, again at the Comédie-Canadienne, in 1967, directed by Jacques Létourneau with sets by Jean-Claude Rinfret, featuring Pelletier, Ovila Légaré, Juliette Huot and Monique Mercure. It was revived in 1998 by Compagnie Jean-Duceppe, directed by Yves Desgagnés.

Joseph is a troublemaker and drunkard who has been causing problems since he came back from the army at the end of WWII (he did not even see battle). He has trouble with his father, his stepmother, his step-siblings and most of the rest of the world. The only one with whom he is happy is his half-sister, Fleurette (who adores him). He runs away, returns years later, gets into legal trouble, is bailed out by his father, and then fails to meet the debt his father incurred on his behalf. Finally his father, who has always held out hope for his son, sends him away and then dies of heartbreak. Joseph goes off to join the army, again, and dies in the Korean War.

Dubé's most produced work, this is an overlong soap-opera that still manages to tell a touching story of a father and a son. It also gives a fairly accurate portrait of post-war, pre-Quiet Revolution Quebec and the joys and suffocation a family can bring. The post-war sentiments and the character of Joseph are very similar to that of Jimmy Porter is John Osborne's Look Back in Anger, produced in England a year earlier.