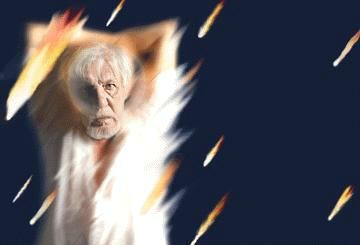 William Hutt in the Stratford Festival production of King Lear

Internationally acclaimed actor, born in Toronto,Ontario May 2, 1920, died in Stratford, Ontario June 27, 2007. His career was primarily at the Stratford Festival, where he excelled in major roles since its inception in 1953.

A decorated veteran of WWII, he completed a B.A. from the University of Toronto after returning to Canada. He first acted with the Hart House Theatre, making his professional debut in summer stock, and then in the Canadian Repertory Theatre, Ottawa.

At the Stratford Festival he played lead role in many of the productions of Shakespeare's plays, including s Lear (three times), Hamlet, Macbeth, Prospero (four times), Falstaff, Titus Andronicus, Brutus, Timon, Feste, Richard II, as well as unforgettable performances as Lady Bracknell in The Importance of Being Earnest (three times), in Three Sisters (with Maggie Smith, Marti Maraden and Martha Henry) and Long Day's Journey into Night. His final performance at Stratford was fittingly as Prospero in The Tempest (2005).

He also played in New York, not only with the Stratford company, but also in Edward Albee's Tiny Alice and Shaw's Saint Joan; and in Great Britain (Bristol Old Vic, West End) and many of Canada's important houses including Vancouver Playhouse, Grand Theatre, London and the Shaw Festival. In 2004 he played the role of Vladimir in Waiting for Godot for Soulpepper Theatre Company

He has also won awards for his film and television appearances, including an ACTRA for his portrayal of Sir John A. Macdonald in The National Dream (1978).

His performances were marked by a resonant voice and an assured stage presence which never subverted the characters he played. He was equally adept at tragic and comic roles.

William Hutt was inducted into the Order of Canada in 1969. In 1988, he received the Toronto Drama Bench Award for Distinguished Contribution to Canadian Theatre. He was awarded the Governor Generals Award for lifetime achievement in 1992. He has received Honorary Doctor of Letters degrees from McMaster University, and the universities of Ottawa, Guelph, and Western Ontario. In 2000 he was inducted into Canada's Walk of Fame, and the Waterloo Street Bridge in Stratford was renamed for him.

He has said of his early years at Stratford, "I was as bombastic as most young actors, but I came to realize that what is not said is as interesting as what is."