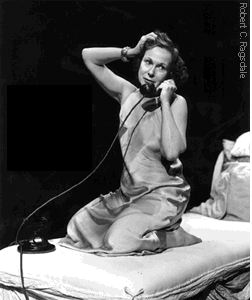 Ontario-based actor/director, born in 1943 in Montreal, who has worked in many of Canada's major theatres in English and French. Diana Leblanc studied at the National Theatre School of Canada in both the English and French programs in the first graduating class.

Her extensive directing credits include The Rehearsal at Canadian Stage (1995); Hamlet at the Stratford Festival (1996); Skylight by David Hare at the National Arts Centre and Citadel Theatre (1999). Her subsequent Stratford productions of Sweet Bird of Youth, Death of a Salesman, The Cherry Orchard and, especially, Long Day's Journey Into Night (which was also filmed), established her as a director of the first rank. In 1999, she directed Macbeth, featuring the husband and wife team of Martha Henry and Rod Beattie. In 2013, she directed John Murrell's Talking Shakespeare, starring Martha Henry.

Diana Leblanc was artistic director of Théâtre Français de Toronto from 1991 to 1996, and acted in the company's 1996 production of La Voix humaine. She has also directed for the Canadian Opera Company (Dialogue des Carmelites) and Opera Ontario (Madama Butterfly, October, 2000).

She is a founding member of Soulpepper Theatre Company, where she directed the summer 1999 production of A Streetcar Named Desire starring Fiona Reid; Who's Afraid of Virginia Woolf; The Real Thing; The Maids; The Zoo Story; Doc (summer 2010); and Glenn by David S. Young (2014).

Her many acting credits include Heartbreak House (Shaw Festival 1968); The Measure of Love and Little Foxes (Stratford); Mirandolina and The Mill on the Floss (Soulpepper); La Voix Humaine, Le Pays Dans la Gorge (Dora Award), Damnée Manon sacrée Sandra and La Maison Suspendue, both by Michel Tremblay (Théatre Francais); and Scorched by Wajdi Mouawad (Tarragon Theatre/National Arts Centre. In January 2014, she played an aging Juliet in The Last of Romeo and Juliet by Mitchell Cushman, set in a retirement home, with David Ferry as Romeo (Talk is Free Theatre, Barrie, Ontario).

Leblanc has also worked extensively in television and film.

In 1998 she received a grant from the Alliance française of Paris for her body of work toward building bridges between anglophone and francophone culture. In 2015, she received a Governor General's Performing Arts Award.

Her advice to actors is to "love the art in yourself, not yourself in the art."