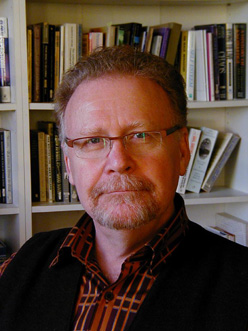 He was trained in television and screen writing (indeed, many of his plays have been transferred to these other media).

He has served as playwright-in-residence at the National Theatre School of Canada, Neptune Theatre, Canadian Stage, and Centaur Theatre (2017); and composer-in-residence at the Banff Centre for the Arts. He has also worked as a dramaturg at Concordia and McGill Universities.

In 2001 his epic verse play, The Harps of God, won the Governor Generals Award. The Jury Citation applauded Stetson's creation of a new theatrical language -- "both authentic to the Newfoundland idiom and as powerful and economic as poetry. . . The play explores faith and meaning and pays tribute to the survival of a people and a nation." In the Hour Magazine theatre critic, Gaetan Charlebois described the published play (Playwrights Canada Press) as "a terrific read, and theatrically its ambitions are breathtaking."

The Harps of God premiered at Rising Tide Theatre, (dir. Richard Rose). It is based on real events: "In 1914, on the ice fields of Newfoundland, 132 sealers were apparently abandoned on the floes for two days and two nights. Two thirds of their number perished. They might have been saved if it were not for misunderstandings among the sealing ship captains (and the removal of the wirelesses on the ships to save the company money), and if Nature herself had not conspired to destroy the men. (Nature is the unseen character of the play - the work's only female entity. Chillingly, the voice of that entity is the screaming of the harp seal mothers calling for the slaughtered young.) Stetson does things simply and effectively; he sticks with the men on the ice. We watch them doing their ugly job, and Stetson doesn't shy away from the ugliness of the work. We witness their slow realization that they are out there alone. . . The Harps of God flows over you like rich wine. It is excessive, like [Peer] Gynt, but also heartbreaking and, in its final moments, utterly harrowing." (Charlebois).

In his more recent play, Excess he explores issues of "world domination, liberal social democracy vs. conservative capitalist democracy, and the very survival of the Canadian Enlightenment in this harsh post 9/11 climate." Excess "careens among social comedy, agitprop and boulevard in this deadly serious examination of the contemporary Canadian experience." (website)

He has directed some of his own works, and plays by Berni Stapleton (Offensive to Some and Woman in a Monkey Cage); and by Don Druick (Where is Kabuki?).

In 2007, he was appointed to the Order of Canada. In the same year, he received the PEI Arts Council's Award for his distinguished contribution to the literature of PEI.

Kent Stetson is based in Montreal, and works extensively in PEI.