In 2016, KYT premiered The Conversion by Sutley and Cuckow, about two vigilantes who abduct a wealthy businessman and attempt to change his sexuality with abusive and unorthodox methods, until they uncover a disturbing history about themselves. In 2018, the Company mounted Shakespeares R&J, by New York actor/playwright/screenwriter Joe Calarco. Four boys at a strict Catholic boys prep school meet after class to read Romeo and Juliet, and begin to enact the roles across gender lines, freeing themselves from social and personal limitations. 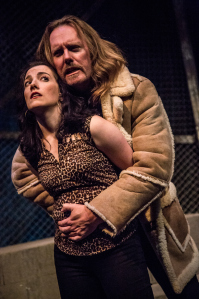 The Crackwalker (2014), with Beth Graham and George Szilagyi

Productions typically feature some of Edmontons best actors. In The Crackwalker (dir. Sutley), Nadien Chu provided a compelling interpretation of Theresa as an amoral innocent, Beth Graham gave a contrasting performance as the cynical, hardened yet vulnerable Sandy, Nathan Cuckow ran the emotional gamut from hope to despair in his relationship with Theresa, George Szilagyi was a volatile and violent threat to others and himself, and Sheldon Elter haunted the play as the Crackwalker, existing on the margins as a social conscience.

The company performs in the Arts Barns, Varscona Theatre, or the Roxy in the Old Strathcona district.