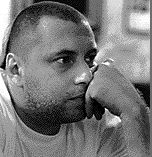 Following his graduation, Bienvenue wrote poetry, blues lyrics, and acted in performance art. He gave improvisation workshops, worked as an actor and wrote for Radio-Canada.

His early works include Histoires à mourir d'amour (Salle Fred-Barry, 1993), which consisted of two short plays for three characters: Lettre d'amour pour une amante inavouée and In vitro. Other plays include les Foufs, Je suis un homme mort, and Règlement de contes which premiered at the Théâtre de Quat'Sous in October 1995, and was translated by Shelley Tepperman as Settling of Accounts. In October, 1999, his Le lit de mort premiered at Théâtre dAujourdhui.

His collection of six of "urban tales" Dits et Inédits (including Les Foufs and Joyeux Noël Julie) were performed at Théâtre la Licorne in June 1997 as part of the Festival de théâtre des Amériques (now Festival TransAmériques). It received the Governor Generals Award for French-language drama in 1997. La vie continue was shortlisted for the Governor General's Award in 2008.

Most of his works are tales of gritty, violent urban life in the form of dramatic monologue that mixes joual with poetry. "They have the effect off tabloid news stories revealed in confidence" (Moss), but with a moral underpinning.

Bienvenue co-founded Urbi et Orbi with actor Stéphane Jacques, which produced a five-night theatrical event entitled 38 (September 1996), featuring thirty-eight short plays by thirty-eight different writers, all under the age of thirty-eight. Each work was inspired by one of William Shakespeare's works. He is also a founding member of Dramaturges Éditeurs, a publishing house specializing in drama.