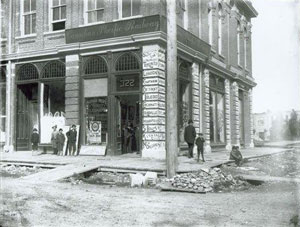 Theatre company established in Peterborough Ontario in 1977 by John Plank with the Peterborough Theatre Guild. He directed Private Lives, Belle of Amherst and Lady Audley's Secret the following year, and in 1979 the group was reorganized as a professional theatre company performing during the summer season at Trent University's Wenjack Theatre. In 1991, the company began using the theatre in the renovated Market Hall (originally constructed in 1890) in the city centre.

Since 2001 the Arbor has been a Young Peoples Theatre. Its mission is to develop and present original, affordable, curriculum-linked, primarily Canadian historical plays for young audiences which are of high artistic standards, and which entertain, educate, and provoke dialogue and reflection. It tours its productions to regional schools. For over twenty years, Arbor has presented 19 December "Classics", featuring adaptations of popular fairy tales and stories.

Ray Henderson is the founding and current Artistic Director of the YPT.