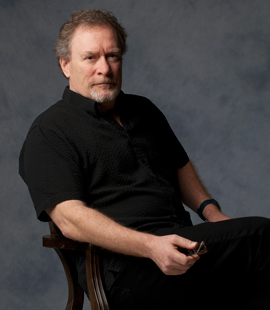 Accomplished actor, with a powerful stage presence, born June 12, 1957 and raised in Stratford, Ontario. Benedict Campbell is the son of iconic Stratford actor and director, Douglas Campbell and actress Ann Casson, the daughter of legendary British actress, Sybil Thorndike. He studied at the Bristol Old Vic and performed in England before joining John Wood and the National Arts Centre acting company. With them he performed in Troilus and Cressida, Hamlet, Equus, Richard III and Julius Caesar.

From 1991 for eleven seasons, he performed with the Stratford Festival, including his father's Festival productions of Oedipus Rex in 1997 and Julius Caesar in 1998. Among other productions at the Festival in which he has played are Romeo and Juliet, Taming of the Shrew, King Lear, Love's Labour's Lost, Cymbeline, Macbeth, The Country Wife, Dracula (1999), The Three Musketeers (2000), and Tempest-Tost (2001).

He has also performed at Canadian Stage (A Little Night Music, among others), Factory Theatre (Love and Anger), the Grand Theatre, London (Goodnight Desdemona (Good Morning Juliet), among others). In 2015, he played King Lear in a co-production by Theatre Calgary and Bard on the Beach.

From 2003 to 2017, he acted in the Shaw Festival, appearing as the incorrigible Joxer Doyle in O'Casey's Juno and the Paycock, as Henry Higgins in My Fair Lady, as Boss Mangan in Bernard Shaws Heartbreak House in 2011, and as Undershaft in Major Barbara (2005 and 2013). In 2010, he performed the roles of Lopakhin in Anton Chekhovs The Cherry Orchard and Broadbent in Bernard Shaws John Bulls Other Island. His other Shaw Festival credits include The Entertainer (2009), In Good King Charless Golden Days (2009), An Inspector Calls (2008), Mrs. Warrens Profession, Mack and Mabel (2007), Hotel Peccadillo, The Crucible, Too True To Be Good, Happy End (2003), Man and Superman, Nothing Sacred, and The Plough and the Stars.

Benedict Campbell has also worked extensively in television and film.

He was married to director Jackie Maxwell, with whom he has two daughters.