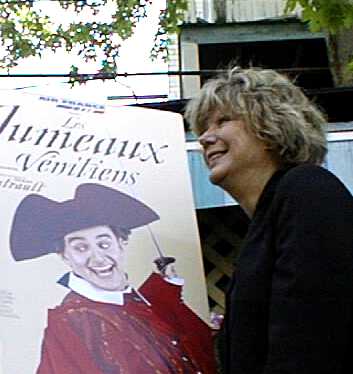 Quebec-based actor/director, born May 16, 1931. Her father was a police detective who wanted her to be a court stenographer. After leaving high school she worked as a typist for three years before beginning a career as a performer.

Though she has directed all the French mainstage productions for Just for Laughs, Denise Filiatrault's was a star of stage, film and television for decades before the comedy festival. She is probably best remembered for her comic work, notably teamed with comedienne Dominique Michel on stage and television. She also appeared in dozens of musical revues and variety productions as well as the works of Michel Tremblay. She was cast primarily in comic plays at first, until she began to reveal a wider range in the Just for Laughs shows, not all of which were broad comedies.

On directing classical comedy works, prior to the run of Monsieur Chasse, Mme Filiatrault told Voir (Montreal), "You can't mount a comedy today like you did 100 years ago. If he lived in 1999, Feydeau himself would cut his plays so that it would work in our era."

Mme Filiatrault also directed the 1998 hit movie version of the Michel Tremblay novel C't'à ton tour, Laura Cadieux (and is slated to direct the sequel to the movie).

Among her many awards, are Officer of the Order of Quebec, and of the Order of Canada. In 1999, she received a Governor Generals Award for Lifetime Artistic Achievement.