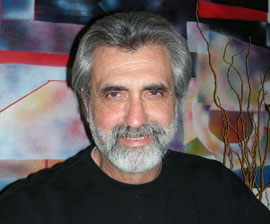 Alberta-based playwright, born in Lethbridge, July 2, 1953, and raised on a farm south of Lethbridge. He studied at the University of Alberta, earning a B.A. in drama, and an M.F.A in Playwriting in 1978, the first person to receive that graduate degree at the UofA.

Gordon Pengilly has written more than fifty plays for TV, film, radio, and stage, and his work has been produced across Canada and abroad. He was a writer for Theatre Network's Inuvik documentary play Kicker (1978), and for the Fort McMurray show, Hard Hats and Stolen Hearts (1977), which was one of the first Canadian plays to be performed Off-off-Broadway at the Performance Garage in 1978. His one-act play, Seeds (University of Alberta, Studio Theatre, 1977, dir. Keith Digby) has been produced across Canada and in Europe, and published in Prairie Performance (ed. Diane Bessai. NeWest Press, 1980).

They Don't Call Them Farmers Anymore 1993) and Wildcat! (2000) have toured Alberta and have aired on CBC national radio. Harm's Way was workshopped by Alberta Playwrights Network in 2006. His newest play, Flesh and Ghost, written for Theatre Calgary as part of Fuse 09 was workshopped by the Playwrights Theatre Centre in Vancouver and showcased at the Manhattan Theater Club by Broad Horizons Theater of New York.

Gordon Pengilly is one of the most prolific radio dramatists in Canada. In 1989 CBC selected The Ballad of an Existential Cowboy as one of its Best-of-Decade. In the Middle of Town Stands the Dreamland was nominated for a Peabody Award in 1993 and rebroadcast in Australia. His 13-part mystery series, Bailey's Way was broadcast in 1999-2000 and again in 2001 on XM-Satellite out of Washington DC. Seeing in the Dark received the 2007 BBC International Radio Drama Prize and was broadcast on the World Service.

His screenplays include adaptations of Drumheller Or Dangerous Times and Metastasis. His one-act play, The Work Play premiered at the Actor's Loft in New York in 2001, in Japan in 2003, and has been made into a short film in Los Angeles. A screenplay version of Seeing in the Dark won the Canadian Short Screenplay Competition. It was shot in Regina by Year of the Skunk Productions and premiered at the Edmonton International Film Festival in 2011, then in Toronto at Short and Sweet. He has also written episodes for childrens' TV series, and documentary scripts for White Iron Video and Film.

He is a published poet, and former editor for Dandelion Magazine.

He currently lives in Calgary.